Word of the week: Caste

Few recent pieces of writing have jolted me as thoroughly as “America’s Enduring Caste System,” by Isabel Wilkerson, which appeared in the July 5 edition of the New York Times Magazine. Wilkerson’s 2011 history of the Great Migration, The Warmth of Other Suns, is one of the best books about America I’ve ever read, so I was prepared to be engaged and enlightened by her article, which is an excerpt from her forthcoming book Caste: The Origins of Our Discontents.

I was not disappointed. 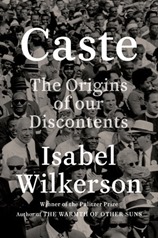 Wilkerson, who won the 1994 Pulitzer Prize for Feature Writing, develops an elegant metaphor for America: “the house we all live in.”* Caste, she writes, is the invisible support for this building:

Like other old houses, America has an unseen skeleton: its caste system, which is as central to its operation as are the studs and joists that we cannot see in the physical buildings we call home. Caste is the infrastructure of our divisions. It is the architecture of human hierarchy, the subconscious code of instructions for maintaining, in our case, a 400-year-old social order. Looking at caste is like holding the country’s X-ray up to the light.

What is caste? It’s “an artificial construction,” Wilkerson writes, “a fixed and embedded ranking of human value that sets the presumed supremacy of one group against the presumed inferiority of other groups on the basis of ancestry and often immutable traits, traits that would be neutral in the abstract but are ascribed life-and-death meaning in a hierarchy favoring the dominant caste, whose forebears designed it.” In America, you will not be surprised to learn, caste is based on “race.”

The English word caste comes from Latin castus via Spanish and Portuguese casta; it first appeared in writing in 1613, in a description of the social structure in India. The Latin word means “pure”; its other English relatives include chaste and chastity. Caste is unrelated to cast (throw), a borrowing from Old Norse that entered English in the 1200s. (Confusingly, social-system caste was often spelled cast until the 19th century, when the French spelling was adopted.)

Caste, writes Wilkerson, “predates the notion of race and has survived the era of formal state-sponsored racism long officially practiced in the mainstream”:

The modern-day version of easily deniable racism may be able to cloak the invisible structure that created and maintains hierarchy and inequality. But caste does not allow us to ignore structure. Caste is structure. Caste is ranking. Caste is the boundaries that reinforce the fixed assignments based upon what people look like. Caste is a living, breathing entity. It is like a corporation that seeks to sustain itself at all costs. To achieve a truly egalitarian world requires looking deeper than what we think we see.

Caste will be released August 4. I’ve already pre-ordered it.

* The “house” metaphor for America has a long history that includes, of course, Abraham Lincoln’s “a house divided against itself cannot stand.” It was made explicit in “The House I Live In,” a song written in 1943 by Abel Meeropol (using the pseudonym Lewis Allan) and Earl Robinson and recorded by Frank Sinatra and many others. The song is the centerpiece of a short film Sinatra made in 1945 in which the singer breaks up a gang of boys who are bullying a kid because “we don’t like his religion.” That performance omits the second verse, which is retained in a stirring version recorded by Paul Robeson.

The house I live in, my neighbors white and black,
The people who just came here, or from generations back
The Town Hall and the soap box, the torch of Liberty,
A home for all God’s children, that’s America to me.

Both Earl Robinson—who also wrote the great labor anthem “Joe Hill”—and Abel Meeropol were blacklisted during the McCarthy era. That’s irony to me.

Posted at 05:00 AM in Books, Journalism, Word of the Week | Permalink