In America, until the 19th century, “soap” mostly meant “laundry soap.” (The word soap comes to us from Old English, where it referred to “a reddish hair dye used by Germanic warriors to give a frightening appearance,” according to the Online Etymology Dictionary, which also tells us that soap has been a synonym for “flattery” since 1853.) Soap for skin was developed “largely as a way to make money from the leftovers of the meatpacking industry, which produced large quantities of unused animal fat,” Jarvis writes.

Selling the stuff to a population unused to regular bathing required ingenuity, and industry pioneers—notably Procter & Gamble and Lever Brothers (now Unilever)—were up to the task. 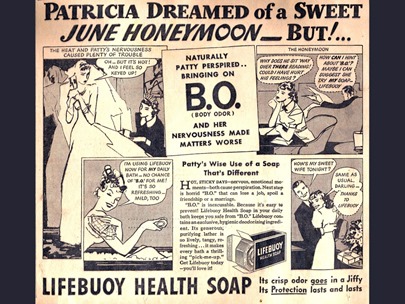 Lifebuoy soap was introduced by Lever Brothers in the UK in 1895; it was one of the most popular soaps in the US from the 1920s through the 1950s. Lifebuoy didn’t coin “B.O.”—that honor belongs to the deodorant brand Odo-Ro-No—but it’s responsible for popularizing the term, largely through a series of story-comics like this one that appeared in magazines in the 1930s and 1940s. For more, see the Comics with Problems website, which is where I found “Patricia.”

Last year, the beauty-and-personal-care market in the U.S. was valued at nearly a hundred billion dollars, which makes it hard to imagine a time when people had to be persuaded to use soap. But the soap industry, Hamblin argues, serves as an effective introduction to the history of American marketing. Early soap companies pioneered many techniques that we still see today: a single company owning lots of competing brands with nearly identical products, in order to foster feelings of consumer choice and loyalty; the use of “sponsored content,” such as the soap operas or Procter & Gamble’s “How to Bring Up a Baby,” which was part health pamphlet and part advertisement. The ad campaigns created a sense of lurking danger in the competition by claiming that their own products were safer and purer, or they promoted, as product virtues, obscure, jargony terms (“triple milled”) that consumers assumed to be important simply because they were touted on a package. The companies leaned, not at all subtly, on racism and classism to sell their products. They even used people who would now be called influencers, such as the film stars who appeared in “9 out of 10 screen stars use Lux Toilet Soap” ads. “Lever never even paid them,” Hamblin writes, “and the practice being so new, the stars apparently didn’t think to ask.”

There’s a lot more about soap operas in Jarvis’s piece. (Soap opera dates back to 1939, when it was used disparagingly to refer to sponsored radio serials.) Soap opera effect is a more recent coinage: it’s also known as “motion smoothing,” and some people really, really hate it.

Posted at 08:21 AM in Advertising, Books, Television | Permalink