Sometimes Always Never (2020), starring Bill Nighy as a Scrabble-playing tailor, debuted at the London Film Festival in 2018 and opened in virtual theaters in the US in June. It will be available on streaming platforms July 10. 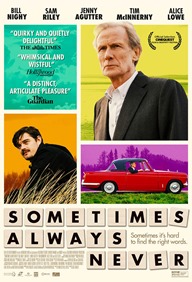 “Like the grieving Scrabble enthusiast at the heart of its unique story, Sometimes Always Never scores high enough to be well worth a play.” – Rotten Tomatoes. The film’s original title was Triple Word Score, like the novel on which it’s based.

Never Rarely Sometimes Always (2020) was scheduled to open in theaters in April. Instead, it’s available to rent now on various platforms. 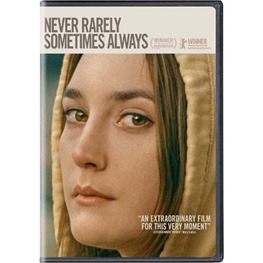 “Faced with an unintended pregnancy and a lack of local support, Autumn (Sidney Flanigan) and her cousin Skylar (Talia Ryder) embark across state lines to New York City on a fraught journey of friendship, bravery and compassion” (official site). This film’s original title was A—as in “abortion” or “The Scarlet Letter.” 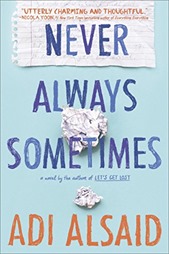 “Best friends Dave and Julia have spent their high school years living by their carefully crafted Never List — a list of rules they created to make sure they never become high school clichés. But as graduation approaches, Dave is shocked when Julia decides that they should now do everything on the list, from skinny dipping (Rule #6) to road-tripping (Rule #9).”

Back in February, Ashley Spencer wrote about “the curious case of the strangely similar titles”—Never Rarely Sometimes Always and Sometimes Always Never—for the New York Times. (She didn’t mention the novel.) Spencer wrote that the Never Rarely Sometimes Always title came about through director Eliza Hittman’s “conversations with Planned Parenthood employees and refers to the possible answers to a series of questions that intake counselors ask patients to assess if they’ve been the victims of intimate partner violence.”

As for Sometimes Always Never, it couldn’t keep the original Triple Word Score title because Hasbro, which owns Scrabble, was creating legal hurdles. The final title comes from a line of dialogue that Bill Nighy’s well-dressed character says to his grandson “as he taught him the buttoning rule for a three-button suit (top: sometimes, middle: always, bottom: never).”