I’d seen those fancy online stories, but I’d never heard  them called scrollytelling. Nor could I find the word in any online dictionary, including Urban Dictionary and three computer glossaries. Nevertheless, it’s been very much in circulation since at least 2014, the date of an AllTheContent blog post that heralded scrollytelling as “a new way to show a story”:

A long time ago, people used to think that as internet goes fast, everything had to be fast, so articles had to be short and simple, almost like a dictionary, or a few sentences with a title and subtitles. But Scrollytelling came here to show that was wrong.

Scrollytelling articles are long, full of details, and in most cases, combined with sound, videos and movement in the images, so as you’re scrolling down, you see some movement and you know you have to scroll so the things happen, it’s, in a certain way, interactive, like a game. You can’t change the story, but you make it happen, you’re an important part of it.

A year later, NewsNext, a multinational journalism site, defined scrollytelling as a blend of “scrolling” and “storytelling,” and called it “a hot trend in online journalism! … Photos, data visualizations and video effects are combined to produce engaging and impactful stories.” The New York Times pioneered the method with a 2012 feature about an avalanche called “Snow Fall”; but commentary at the time—like this Atlantic story—called it simply “multimedia” and “experience based.”

In a 2019 explainer for Nightingale, the journal of the Data Visualization Society, Lorenzo Amabili took a sophisticated and detailed approach:

Although slideshows are similarly effective in terms of user engagement, the strengths of Scrollytelling can be identified with some of its properties. First, scrolling has become a natural gesture while navigating web sites which does not require much user effort. We do it all the time without even realising it. And this is the case since the mid-90’s with the scroll wheel popularisation. Second, it can easily engage readers because of the sense of control, exploration and discoverability inherent to scrolling. You can just scroll down or up to go forward or back in the story at any time, and differently from watching a video, the reader keeps being actively “in touch” with the story while consuming it. Finally, it is relatively easy to implement.

That sounds very professional, but to be honest I find scrolly playful and whimsical: The -y suffix gives the word the informal feeling of a diminutive or endearment. Think of doggy, aunty, Timmy, and all those Australianisms: barbie, selfie, mozzie, prezzie.

We’ve had the noun scroll (a roll of parchment or paper) in English since about 1400; it’s derived from the older scrowe and altered because of the object’s association with roll. The verb, meaning “to write down in a scroll,” came along around 1600, as did the noun signifying a type of ornament in furniture or architecture. The computer sense (“to show a few lines at a time”) first appeared in print in 1981. 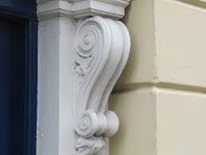 Lately I’ve been seeing another scroll neologism: doomscrolling, which appears to have been coined in response to the COVID-19 crisis. The earliest citation I found is a March 24, 2020, Urban Dictionary entry, which gives this definition: “Obsessively reading social media posts about how utterly fucked we are.” (Update! The new and excellent Because Language podcast has antedated doomscrolling to an October 7, 2018, tweet from @callamitys: “Taking a break from doomscrolling and being inundated with things and stuff.” Listen to Because Language and you’ll learn valuable stuff, too!)

An undated Merriam-Webster “Words We’re Watching” entry (published after April 14, the date of the newest citation) discusses doomsurfing and doomscrolling (“doomsurfing on your phone”) as “new terms referring to the tendency to continue to surf or scroll through bad news, even though that news is saddening, disheartening, or depressing.” Doom goes all the way back to Old English, when it had the neutral meaning of “judgment”: a modern cognate is deem. “Doomsday” is literally “judgment day.”

Posted at 05:00 AM in Jargon, Neologisms, Web Content, Word of the Week | Permalink