I’m not going to rehash cancel culture (which was the Macquarie Dictionary’s word of the year for 2019) or woke (which has been considered for WotY status every year since 2016). Instead, I want to talk about a non-slang word in Cotton’s little speech: obelisk. 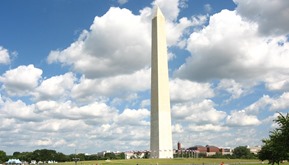 An obelisk is a “tapering rectangular stone column with a pyramidal apex”; the word was imported into English in the 1560s from Middle French obélisque, which took it from Latin obeliscus (“a small spit” of the sort used in cooking), which got it from Greek obeliskos (“small spit, obelisk, leg of a compass”). The Greek word is a diminutive of obelos, which can mean a needle, a spit, or a pointed pillar.
The Greeks didn’t invent the obelisk: that honor goes to the ancient Egyptians, who called obelisks tekhenu, which means “pierce the sky.” (Compare skyscraper.) You can learn quite a lot about Egyptian obelisks in this article: for example, each one was a monolith, carved from a single piece of stone, and it’s still a mystery how the tekhenu were raised.
In typography, obelisk and obelus are used interchangeably to signify the dagger symbol: † It’s sometimes used for footnotes when an asterisk has already been used.
Here’s another fun historical fact: Before about 600 BCE, the Greeks used iron cooking spits—obelisks—as currency. That was cumbersome, so they began substituting a silver coin called an obol (you can see the relationship to obelisk), which was worth one-sixth of a drachma.
Here’s my own obol story: About 15 years ago, I was hired to name a company that was taking the lead in the brand-new mobile-payment industry. (This was at least two years before the iPhone, and at least eight years before Apple Pay.) One of the directions I explored was historical terms for cash and currency, and one of the words that the client liked was obol. I developed several names incorporating obol—Obolink was one we considered for a while—before we settled on Obopay.
The company had originally intended to serve “underbanked” and “unbanked” populations (two adjectives I learned while working on the project) in developing countries, especially in Africa. Later it turned its attention to India. But in 2012 Obopay was shut down by Nokia Money, its primary partner.
There’s a happy ending: Two Indian entrepreneurs bought Obopay’s software assets and relaunched the company in 2013. It’s still in business, with headquarters in Bangalore and many clients in Africa. It’s nice to see a thriving afterlife for a name I helped bring into the world!

Posted at 05:00 AM in Architecture, Greek, Politics, Word of the Week | Permalink