This “racial” usage of hypodescent originated with one influential American anthropologist, Marvin Harris (1927–2001), who coined the term in a 1963 paper, “The Structural Significance of Brazilian Racial Categories.” (Before it was applied to populations, hypodescent—the hypo- prefix means “below” or “under”—was used occasionally in discussions of anatomy.) In Brazil, where Harris did his early fieldwork, the children of “racially” mixed parentage—Harris always put “race” and its derivatives, as well as “white” and “black,” between quotation marks, to mark the concept’s artificiality—were categorized according to their appearance and weren’t subject to the black-and-white “bifurcation” of the US population. Full siblings with different skin tones, for example, might be classified as as branco (white), pardo, (brown or “mixed”), or preto (black)—or any of several other color-tied descriptors.

Hypodescent was new to me, but I was familiar with its more colloquial cousin: the “one-drop rule,” a peculiarly American invention that decreed, from the slavery era onward, that “a black is any person with any known African black ancestry,” according to the sociologist F. James Davis, author of Who Is Black? One Nation’s Definition (1991):

It is also known as the “one black ancestor rule,” some courts have called it the “traceable amount rule,” and anthropologists call it the “hypo-descent rule,” meaning that racially mixed persons are assigned the status of the subordinate group. This definition emerged from the American South to become the nation’s definition, generally accepted by whites and blacks. Blacks had no other choice. 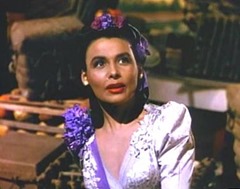 Lena Horne (1907–2010) as Julie in a brief segment of Show Boat shown in the 1946 Jerome Kern biopic Till the Clouds Roll By. Horne, a descendant of the “white” John C. Calhoun family and of Native American and enslaved African forebears, had a long stage and film career but never had a leading role in major studio productions “because of her race and the fact that her films had to be re-edited for showing in cities where theaters would not show films with black performers.” (Wikipedia) Keep reading for more about Show Boat.

Of course, as archaeologists and anthropologists now remind us, all living humans trace our ancestry to Africa, which means everyone in the US is, technically speaking, an African American.

In Oscar Hammerstein and Jerome Kern’s 1927 musical Show Boat, adapted from Edna Ferber’s novel of the same title and set in the 1880s and 1890s, Julie LaVerne is an actress who is “passing for white”; her “mixed” marriage to the “white” actor Steve Baker is illegal in Mississippi, where the show boat makes a stop. In a dramatic scene, Steve takes a knife, cuts Julie’s hand, and sucks the blood from the cut. He then declares to the sheriff that because he has “one drop of black blood,” the marriage is legal. From Wikipedia: “The couple have escaped the charge of miscegenation, but they still have to leave the show boat; identified as black, they can no longer perform for the segregated white audience.” In the film versions of Show Boat, the role of Julie was played by a “white” actress (Helen Morgan in 1936, Ava Gardner in 1951).

Lena Horne sings, beginning about 2:18. The song title is “Can’t Help Lovin’ Dat Man of Mine,” but Horne defiantly sings “that.” Note, too, the changed lyric in the overture: “Here we all work on the Mississippi.” I’ll leave it to you to research the original words.

Lena Horne in Show Boat from Movie Memories on Vimeo.

Posted at 05:00 AM in Current Affairs, Journalism, Word of the Week | Permalink

I think Paul Robeson deserves some mention here. In "Showboat", the character Joe, who sings "Ol' Man River", was written specifically by Kern and Hammerstein for him. Paul Robeson, the protean musician, actor, athlete, scholar, and activist, waged a lifelong battle against the tenets of hypodescent and injustice, and for equality for black and indigenous people.