« It's about time, Aunt Jemima | Main | On the Visual Thesaurus: Public-health slogans »

In their introduction, Lukianoff and Haidt define coddle as “overprotect,” but that doesn’t quite get at the whiff of condescension that attaches to the word. The OED’s definition gets at that sense: “to treat as an invalid in need of nourishing food and nursing”; it’s differentiated from pamper “in that it is those who are supposed to be weakly that are coddled.” And you’ll never guess who first used coddle in that sense. OK, I never would have guessed: Jane Austen, in Emma (1816). “My dear Isabella,” she has John Knightly exclaim, “pray do not concern yourself about my looks. Be satisfied with doctoring and coddling yourself and the children, and let me look as I chuse [sic].”

Austen didn’t pluck coddling from her fertile imagination. For two centuries, to coddle had meant “to boil gently,” with great care. If you’ve seen it in this sense, you’re probably thinking of coddled eggs. Here’s a definition from the Wholesome Yum site: 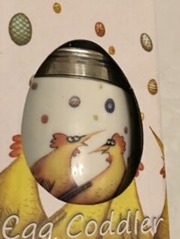 Egg coddler with “raining eggs” design for sale on eBay. The headline says “egg poacher,” but as you can see, it’s obviously a coddler.

And where did culinary coddle come from? The OED says “origin uncertain,” which is annoying, but then goes on to hypothesize:

The form and sense would be satisfied by a Northern French *caudeler = French *chaudeler , < caudel , chaudel , late Latin cal(i)dellum (see caudle n.), in sense of ‘to warm, heat gently’; but nothing is known of such forms, though a noun caudelée is used in Normandy. 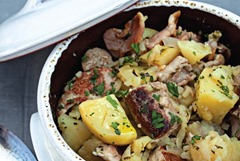 A Dublin coddle (or Irish coddle) is a stew usually made with sausages, potatoes, and onions. Coddle probably comes from the “gently boil” sense. Photo (and recipe) from Epicurious.

Or, the OED goes on to say, it could be related to codling (also spelled querdlyng, quodling, and codlin), which is a type of apple with “a peculiar shape” (“elongated and rather tapering”) that isn’t meant to be eaten raw. Codling has been around since about 1400; in the 1600s it began to be used figuratively to mean “a raw youth.” Codling apples are susceptible to the codling moth.

There’s also an unrelated noun, caudle, that means “a warm drink consisting of thin gruel, mixed with wine or ale, sweetened and spiced, given chiefly to sick people, esp. women in childbed; also to their visitors.” The OED is more confident about caudle’s relationship to a French source.

And what about mollycoddle? It’s even more disparaging than coddle: “to treat with an excessive or absurd degree of indulgence and attention,” according to Merriam-Webster, whose entry includes the fine distinctions between mollycoddle, pamper, humor, and spoil. The Online Etymology Dictionary traces mollycoddle the verb to mollycoddle the noun, first seen in print in 1828, which meant

“overly pampered, fastidious, effeminate male,” from Molly (pet name formation from Mary), which had been used contemptuously at least since 1754 for “a milksop, an effeminate man.”

Charles Dickens, in The Mystery of Edwin Drood, spelled it “moddley-coddley.”

There’s a company called Coddle right here in the Bay Area; it makes and sells convertible furniture. The company was founded in 2017 as Gjemeni, which was a terrible way of spelling “Gemini”; the original product was the Gjemeni couch. In 2018, according to the website, the brand “got a cuddle and is now Coddle.” The products now have better names—Toggle, Switch, Node—but the Our Story web page is so bloated and poorly organized (more than 600 words! get to the point!) that I began to have serious concerns about the writer, who may well be the founder. Someone needs to work some tough love on that copy, stat.

Posted at 05:00 AM in Books, Food and Drink, Furniture, Naming, Word of the Week | Permalink