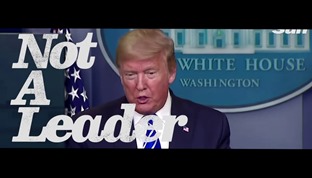 Over the blaring of a siren, the flashing of the presidential hotline, and the chants of protesters, a voiceover asks, “Where is the president in a time of national emergency?” And it answers: “Hiding. Hiding in his security bunker. Watching his shows. Afraid. Alone. Not a leader. Not a president. Just a scared, incompetent embarrassment.”

Those staccato sentences tell a damning story. “Watching his shows” is especially cutting: He’s just a passive, glued-to-his-couch spectator. Note, too, that we’re told that this president is not a leader, and not even a president. (One of my criticisms of the “Mourning in America” ad is its use of “under the leadership of Donald Trump.” If you’re impugning his ability to lead, don’t call him a leader.)

But what makes the voiceover especially effective is the voice. It belongs to a woman.

We don’t hear many women’s voices in political advertising unless the woman is the candidate and she’s “approving this message,” so right away we’re on notice that this is something different. When an authoritative woman’s voice criticizes this particular president—who is on record calling women “nasty,” “dog,” “horseface,” “slob,” “fat pig,” “lowlife,” and more—it sounds like righteous retribution. It made me, for one, want to stand up and cheer. (Disclaimer: I did not vote for this president.)

Choosing a woman to narrate the ad also signals empathy and connection with an important audience: the women (mostly white, many working class, many living in suburbs) who voted for Donald Trump in 2016 and who now “increasingly view Trump as divisive, impulsive and hostile,” according to November 2019 reporting by Impact 2020, the election-coverage project of the McClatchy newspaper group.

(A new ad from The Lincoln Project, “Crowds,” also has a woman narrator. I can only imagine how humiliating and infuriating it must be for this president, who conceives of himself as butch—why, he even plays “Macho Man” at his rallies—to have women enumerate his many shortcomings.)

Note that at no point during the “Panic Room” ad is the non-leader mentioned by name. All the images of him are unflattering, all the sound bites chosen to highlight his folly.

Then there’s the title of the ad: “The Panic Room President,” which evokes both the 2002 horror film (with its triumphant female protagonist, played by Jodie Foster) and the image of a frightened, responsibility-dodging executive.

Finally, the ad ends with a call to action: “It’s time for a competent president. Let’s elect one.” This isn’t quite “Vote for Joe Biden,” but as Paul Waldman puts it, it creates a permission structure that allows wavering Republicans to switch parties this one time. And that may be enough.

Worth a read: Reporter Andrew Feinberg in the Independent on “the Republicans who’d prefer Joe Biden.”

Posted at 05:00 AM in Advertising, Politics, Women | Permalink