My timeline is still filled with people heatedly talking about “Defund the Police” as a slogan.

Rather than be annoyed by some of the hyperbole, let me just offer some potentially soothing perspective from the communications world.

The thread isn’t about word choice or even about the role of the police in a democratic society. It’s about strategy: What is our objective? Who is our audience? And it’s about process: What are the steps we need to take to arrive at an effective outcome?

“Demilitarize police” is also about only one specific thing. It is also too specific and too narrow - but part of the bigger thing.

“Reform police” is too soft and has old connotations that foot backwards to things like “reformatories” rather than forward to something new.

“Right now,” writes The Hoarse Whisperer (who does not reveal his/her/their real name), “we’re having a public debate about only one aspect of police reform: rethinking investment levels. That is automatically too narrow to be an umbrella for all police reform - but it is one aspect of it.” Another frequently used term, “demilitarization” is, again, just one important aspect. “Reimagining,” which also crops up, isn’t active enough.

Creating an effective slogan doesn’t always require a committee (sometimes that’s the most counterproductive thing), but it does require thoughtful analysis and solid listening skills. I encourage you to read the whole Hoarse Whisperer thread, and also a subsequent thread about how to do the necessary research and education to start the work. Also useful: this thread by Eddie S. Glaude Jr., who chairs Princeton University’s department of African American studies.

Reject the frame of law and order, of being tough or soft on crime, and offer a more robust account of public safety that involves massive investment in our communities. And then offer a slogan, if you like. Someone emailed me and suggested “communities first”. 5/

Update: Thanks to Angus B. Grieve-Smith for sharing this image, originally posted on Facebook. 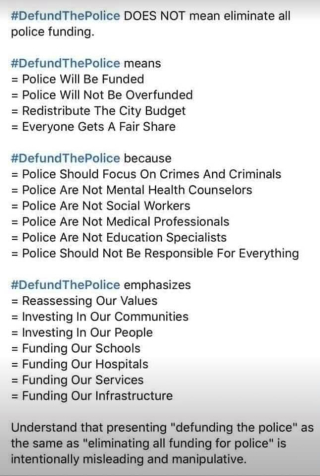 For more about how to develop a creative brief—the essential first step in a branding project like this one—see my ancient-but-still-relevant post, “How to write a naming brief.”

Posted at 05:00 AM in Communication, Current Affairs, Government, Politics, Slogans and Taglines | Permalink

"My conclusion: Whenever you have to explain a slogan by saying 'What we really mean is…', it’s a bad slogan and you’re losing the argument."

That seems pretty extreme to me. I'm not sure it's all bad, or even that it's not the best available catchphrase.

People have been saying lots of different things about the many interrelated issues, and this is a phrase that has caught on broadly. It may mean different things to different people, but its ambiguity may serve to bring about affinities and generate momentum. While the ambiguity may also leave open the possibility of deliberate misinterpretation by people hostile to the ideas, that sort of thing is going to happen no matter what. (See how Trump interprets actual video evidence.)

I think the naming issue not entirely like branding, because the movement is diverse and decentralized, and it's not owned by one entity with the right to define it. As with language in general, a reasonable idea about the best way to communicate something may not be the one that succeeds best. People will use what works for them, and many people have "spoken."

I think the allusive powers of the phrase are stronger than any specific suggestion. It conveys anger, and it suggests "hit 'em where it hurts." It may sound a bit like "defang the police." (I can almost imagine that phrase being used by some, but only because "defund" is already a thing.)

Thanks, Dan. You're right: ambiguity can be an asset. In Nike's "Just Do It," "it" is ambiguous--which means it can signify the whole range of athletic endeavor. In branding terms, it's extensible.

But the meaning of "defund" is pretty clear: "withdraw financing from." It's when people attempt to split hairs--"we'll only withdraw *some* financing," "what we're REALLY saying," etc.--that the slogan's weakness becomes apparent.

For more on good and bad ambiguity, see this Visual Thesaurus column: https://www.visualthesaurus.com/cm/candlepwr/the-power-of-ambiguity/

"Defang the police" is good!

This sweeping change effort needs no-nonsense, simple language and not fluff like "build community", which diffuses accountability. Remember that we are going up against the great "To serve and protect."

“It is not just that, in communication as in thought, we must ever strive toward simplicity… It is more than that: it is a determination not to detour around reality." -Saul Alinsky