« On the Visual Thesaurus: The case of the generic name | Main | Corona brands: King Arthur flour »

Word of the week: Incalculable

“An incalculable loss” reads the banner headline on the front page of Sunday’s New York Times. In small type, over a total of 16 columns, the paper printed the names and ages of 1,000 people—1 percent of the US total to date—whose deaths have been attributed to COVID-19, along with brief bios: “sign-language interpreter,” “wife with little time to enjoy a new marriage,” “remembered for his successful career as a tango dancer.” A sidebar explains that the names and descriptions were drawn from “hundreds of obituaries, news articles and paid death notices that have appeared in newspapers and digital media over the past few months,” lightly edited for clarity. 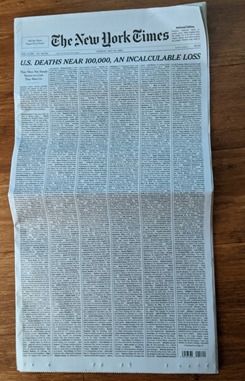 Online, the format is different but equally powerful: an interactive list accompanied by a three-month timeline.

And some of the snark has to do with the definition of incalculable.

Its not incalculable. You just calculated it! pic.twitter.com/DquDsJjQMb

But it’s not the number of deaths that can’t be calculated (one definition of incalculable): it’s the overall loss. According to a Scottish study reported in The Economist, the average victim of COVID-19 was deprived of more than a decade of life. Implicit in the Times’s account—as in this video from Remedy PAC, which supports Democratic candidates—is the conclusion that the death toll would have been greatly reduced if there had been a quicker and more competent response.

“Beyond calculation” is one definition of incalculable. Another is “incapable of being estimated or forecast.” Both usages first found their way into print via the pen of Edmond Burke, the father of modern conservatism, in 1797 and 1796, respectively. The positive form, calculable, is not much older: it first appeared in 1742. Both words are derived ultimately from Latin calculus, which originally meant “a stone used in reckoning,” and which also gave us chalk.

Incalculable has appeared recently in publications other than the Times. Macleans, in Canada, published a story on May 21 about “the incalculable rise of hydroxychloroquine,” which appears to imply that the surge in purchases of the unproven COVID drug either can’t be tallied or can’t be explained. And a headline on a May 7, 2020, letter to the editor of Oswego County (New York) News Now reads “Trump’s Lies Nearly Incalculable.” CNN reporter Daniel Dale, who fact-checks the president, has numbered those falsehoods in the thousands.

Posted at 05:00 AM in Death, Journalism, Word of the Week | Permalink