« Word of the week: Incalculable | Main | May linkfest » 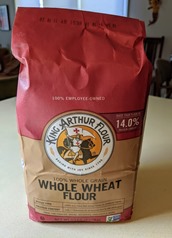 The company now known as King Arthur Flour was founded in Boston in 1790 by Henry Wood, who imported and distributed English flour. A few years later he took a partner, and the company became Henry Wood & Company. In 1895, after a reorganization, the company was renamed after its owners: Sands, Taylor & Wood Company. (That Wood, George E., was unrelated to founder Henry.)

In 1896, after a century of selling imported and regional flours, Sands, Taylor & Wood decided to introduce its own premium flour. What to name it? A 1981 story in the Christian Science Monitor punnily headlined “Knighthood in Flour” tells the story:

George E. Wood, one of the principals and an advertising genius of his day, attended a musical production of “The Knights of the Round Table'” at Boston's old Mechanics Hall. He came away thinking that the sterling qualities of purity , honesty, strength, and fidelity to high ideals that made Camelot were the very qualities that fit the kind of flour his company wanted to market - the best quality, highest in protein, finest milled in the country, and offered, as Frank Sands expresses it, “by people who are dead honest.”

Or, as the company blog puts it: Wood “witnessed the same values in Arthurian legend he saw in his new exceptional flour: purity, loyalty, honesty, superior strength, and a dedication to a higher purpose.” 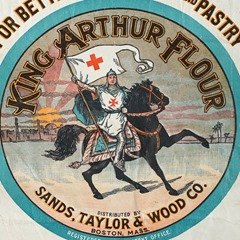 An elaborate logo for King Arthur Flour from before 1984, when Sands, Taylor & Wood moved from Boston to Vermont. 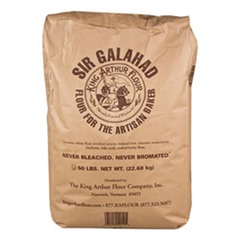 Sir Galahad flour—“the flour of choice for artisan breads and yeasted pastries”—is still sold in pallets and individual 50-pound bags. Also still in production: high-gluten Sir Lancelot flour and soft wheat Round Table flour. In the legend, Galahad was the illegitimate son of Sir Lancelot and Elaine of Corbenic who found the Holy Grail; his name now signifies “a pure and noble man.” 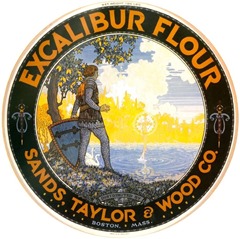 Excalibur flour is no longer produced.

King Arthur Flour is just one manifestation of an enduring fascination with the Arthurian legend, which medieval scholar Elizabeth S. Sklar called “a receptive vessel waiting to be filled by the aspirations, anxieties, and dreams of any individual or group that chooses to appropriate it.” Sklar’s essay, from 2002, includes a long list of “onomastic Arthuriana”—“the invocation of major Arthurian icons in the naming of establishments, services, companies, and such palpably non-medieval products as communication services, motorcycles, and machine tools.” Following John F. Kennedy’s death, his widow Jacqueline famously dubbed his short presidency “Camelot,” after the hit Broadway (and later Hollywood) musical. There are streets named King Arthur Court in Palo Alto, Tracy, and Santa Rosa, California. There is, or was, a Camp Camelot for overweight children. The Excalibur Hotel and Casino in Las Vegas opened in 1990 as a fully themed family resort (and the largest hotel in the world); today, most of the medieval trappings have been replaced with contemporary ones. The Arthurian-themed Prince Valiant comic debuted in 1937 and still tells its epic story in some Sunday newspapers. 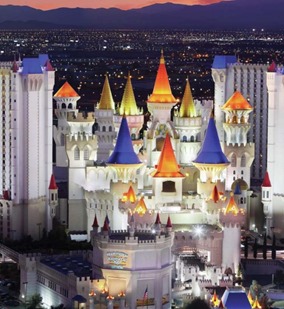 Besides King Arthur Flour, Round Table Pizza is one of the more enduring American brands with a link to Arthuriana. But the company, founded in 1959 in Menlo Park, California, took its name not from legend but from the only furniture the owner had on hand. The theming came later: an Olde English typeface, a mascot called Pizza Knight (“defender of family knight”), mock-medieval banners that spelled “F-U-N,” and the current tagline, “Pizza Royalty.”

Oddly, Amazon gives the publication date of King Arthur in Popular Culture as January 1, 1734.  (It was published in 2002.) And it's ridiculously expensive there. Instead, try Barnes & Noble, a used bookseller, or your local library when it reopens. 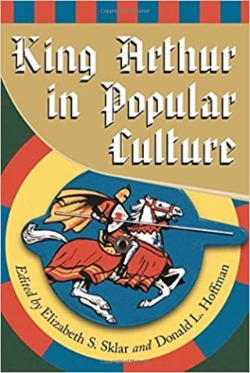 Posted at 05:00 AM in Books, Branding, Coronavirus, Culture, Food and Drink, History, How They Got That Name, Naming, Renaming | Permalink

Thanks - this was fascinating! And yay that you got some flour! We couldn't find yeast for AGES. Or, weirdly, plain yogurt! I finally bought some acidophilus and I'm just going to make my own. We're all going to be weirdly invested in home everything for a good while.