Word of the week: Plalking

There are excellent portmanteaus, weak portmanteaus, and #shitmanteaus. In a category by themselves are Frankenportmanteaus, bilingual awkwardosities that nevertheless compel our attention. Such a phenomenon is this week’s word, plalking.

On the one hand, it’s a Swedish-English hybrid that’s hard to pronounce. On the other hand, it describes a socially useful activity for which no single English word exists.

I discovered plalking via a post on the Merriam-Webster site about the origin of a related word, plogging:

In 2016, an outdoorsy Swede by the name of Erik Ahlström began changing this thinking in those who regularly passed by litter during routine cardio workouts and who felt an itch, which they did not actively scratch, to pick it up with the promotion of plogging. Plogging refers, specifically, to the activity of picking up trash while jogging, and its name is a portmanteau of the Swedish term plocka upp, meaning “to pick up,” and English jogging.

And then, a little further down:

Well, what do you know: There’s a name for my quarantine vocation! Yes, ever since the Bay Area shelter-in-place directive took effect, six weeks ago, I have turned into a grudging but determined plalker. A couple times a week I venture out into my Oakland neighborhood with gloves and 13-gallon trash bags and start picking stuff up. The first time I did it, I had to return to home base after a two-block walk, or plalk. I had filled three bags with urban detritus: vape pens, liquor bottles, cigarette packs, fast-food packaging, discarded nitrile gloves and medical masks, and a distressing quantity of uneaten food.

Last week, in recognition of the fact that the situation was dire and ongoing, I redoubled my commitment to the project: I invested in a PikStik. I do not exaggerate when I say it is a game-changer, in that it changes my posture while turning my foraging into a game. (Those grabbers can pick up cigarette butts!) 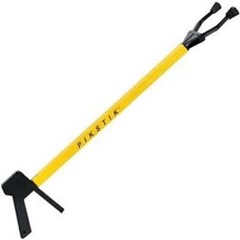 The day I started using the PikStik, and for the first time ever, two passers-by thanked me for my efforts. Until I reluctantly removed my headphones to hear what they were saying—I was listening to the audiobook of An Elegant Defense, Matt Richtel’s engaging and timely investigation into the human immune system—I had assumed that those passers-by were pissed off and yelling angrily at me for some reason. But no! What a pleasant surprise. Although he didn’t call it plalking, David Sedaris wrote about his own zealous litter-collecting for the New Yorker in 2014. His plalking forays—in West Sussex, England—were the inverse of mine in Oakland. “You can tell where my territory ends and the rest of England begins,” Sedaris wrote. “It’s like going from the rose arbor in Sissinghurst to Fukushima after the tsunami. The difference is staggering.” By that standard, I live in Fukushima—there are well-established homeless encampments half a mile to the east and half a mile to the west of where I live. Nor do I expect to have a garbage truck named in my honor, as Sedaris did. Still, I thank him for the inspiration and encouragement, which has stuck with me all these years. Who knew it would take a pandemic for me to plocka upp the challenge?

Posted at 05:00 AM in Oakland, Portmanteaus, Word of the Week | Permalink

Interesting. The charming seaside town of Cambria California refers to this activity as "squibbing" in honor of the Squibbs, long-time residents who would always clean up during their walks, and regularly have squibbing days.

Great post, Nancy! It made me smile. Who knew there was a word for picking up litter while out and about? I do the same thing, though my neighborhood is relatively litter-free. I like the Pik-Stik name and logo too.