Writing. Here on the blog, for Strong Language, for Medium, and on the Visual Thesaurus (columns older than three months are not paywalled).

Pro-bono work. I’d already been doing a little consulting for the Amateur Music Network, a nonprofit startup founded by my brilliant friend (and fellow Dolphin Club bay swimmer) Lolly Lewis. Now I’ve stepped up my commitment to include managing AMN’s Twitter account, and will be contributing more time in the coming months. If you’re offering or seeking lessons or virtual music sessions, check out AMN’s listings and follow AMN on social media.

In addition, I’ve worked on a couple of public-service naming projects that I hope to share after they launch.

And I’m still offering quick naming consultations via Clarity.fm. If you’re using this fallow period to work on your book title, company name, or tagline, request a call.

Photography. When I was in journalism school, back in the Darkroom Ages, I took a couple of photojournalism classes and did a lot of black-and-white photography. I’m rekindling that interest with my Instagram account, which I opened in 2019 and which has turned into something like a coronavirus journal. 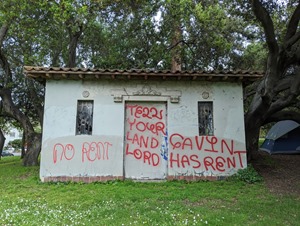 Audiobooks. I listen on the Libby mobile app synced to my Los Angeles Public Library card. (LAPL’s collection is bigger than Oakland’s or San Francisco’s—I have those cards, too.) Recent highlight: The Plague and I, Betty MacDonald’s account, published in 1948, of her nine-month stay a decade earlier in a tuberculosis sanatorium in Washington State. It manages to be both chipper and dire—TB in those pre-antibiotic years was shockingly prevalent and frequently a death sentence. The book’s reader, Heather Henderson, is absolutely perfect.

The New Yorker. The April 13 issue is full of wonderful writing by correspondents from all over. Here’s Geoff Dyer, an expat Brit in Los Angeles (and one of my favorite writers on any subject), and here’s Karen Russell on how the coronavirus has infected our vocabulary, and here’s Ben Lerner on “I like the numbers being where they are,” a quintessentially Trumpian assertion. It’s “the language of a gambler,” Lerner writes: “I like the six; I like those odds; I like the Lakers against the Clippers; I like mid-cap consumer goods.” Read all of the dispatches from a pandemic. And read Michael Schulman’s interview with Fran Lebowitz, who is never leaving New York City and who has a few things to say about Bill de Blasio, Andrew Cuomo, Rudy Giuliani, and, naturally, the person in the White House.

Podcasts. I recently discovered Pessimists Archive, which examines why people keep resisting new things (bicycles, comic books, novels, umbrellas, electricity, refrigerators, etc., etc.). I am deeply interested in this subject—see my Medium story about why people hate new brand names—and hope to write more about it soon. Also in my podcast lineup: 99% Invisible, whose most recent episode is about the history of toilet paper, that triumph of marketing over design and hygiene.

Watching. I’d missed “Years and Years,” a BBC-HBO production, when it first aired in 2019; last week I watched the whole six-episode series, which is set in the very near future and has some chilling things to say about populism. Now I’m catching up with “The Outsider” (also HBO), after listening to Stephen King’s interview with Terry Gross on “Fresh Air.” I’ve also been enjoying excellent theater: the 2013 Lincoln Center production of Rodgers and Hammerstein’s Carousel (Prime) and past National Theatre Live productions (free on YouTube; Jane Eyre streams for a week beginning today). Phoebe Waller-Bridge’s one-woman performance Fleabag—which was the basis for her popular TV series, and which I saw when it streamed in theaters, and which imo is better than the television version—will stream on Prime beginning April 10. And here’s something we all need from the Colombian satirists Las Cardachians (a play on Kardashians).

Subscribing. Subscribe to your local newspaper (if you still have one and want it to keep publishing) and to nonprofit news organizations. For national coverage, I recommend ProPublica. Here in the Bay Area, I’m a sustaining supporter of Berkeleyside, which is now a nonprofit and will soon launch a sister publication in Oakland. And I also support our public broadcasting affiliate, KQED.

Smiling. At “The Covid-19 Song of J. Alfred Prufrock” (In the aisles the women come and go/Talking of the lines at Costco”) and at these gorgeous “coronavirus tourism posters” by artist Jennifer Baer. 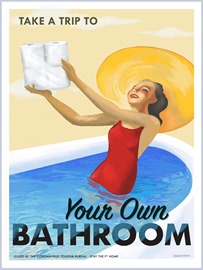 Admiring. The federal response to the COVID-19 crisis has been late, mismanaged, and often shockingly crass and irresponsible. But several states’ governors are filling the void with compassionate and informed leadership. Here’s my own governor, Gavin Newsom, whose daily briefings provide much-needed doses of sanity.

While many are staying home during #COVID19, essential workers are still going in every day.

Thank you to ALL the custodians & janitors throughout CA keeping essential businesses safe & clean. pic.twitter.com/tVJFkGCpH2