Second in a series of posts about US brands that are thriving during the COVID-19 pandemic.

There are other video-conferencing tools—Webex, GoToMeeting, Blue Jeans, Google Hangouts—but during the COVIC-19 pandemic one brand has so dominated the landscape that “Zoom” has become the generic default for the whole category and the basis for a raft of new portmanteau words. As a March 23, 2020, New York Times headline put it: “We Live in Zoom Now.”

Zoom Video Communications—the company’s official name—was founded in San Jose, California, in 2011 by Eric Yuan, a native of China and a former Cisco Webex engineer and executive. The software launched in 2013; four years later, the company had a $1 billion valuation, making it a “unicorn.” According to a PC Magazine article updated on April 15, 2020, Zoom had an average of 10 million daily participants in meetings (or “Zoom Rooms”) in December 2019. By March 2020, as the pandemic forced most businesses to shift to online communication, that number had grown to 200 million. Zoom meetings are free for groups of up to 100; paid plans start at $14.99 per host per month.

With ubiquity has come a spate of coronacoinages, including zumped (“dumped by a significant other over Zoom”), zeder (a Passover seder convened via Zoom), zoomiversity (online college classes), and zoominyan (a virtual quorum—the Hebrew word is minyan—for Jewish prayers). An unfortunate side effect of Zoom meetings has been Zoom-bombing: “gate-crashing” by trolls who insert hate speech or pornographic images into the conference. The “bomb” in Zoom-bombing comes from the jargon of spray-can graffiti; see also photobombing and yarn bombing.

Zoom is an effective and distinctive name for a videoconferencing service, although far from a unique name. (Keep reading.) It’s short, punchy, and evocative, unlike, say, the imperative-descriptive GoToMeeting. In lieu of a name-origin story, which Zoom doesn’t provide, it’s not hard to invent a plausible one: Since at least the 1940s, zoom has been part of photography and cinematography jargon meaning “to bring a subject into close-up without losing focus.”

In other contexts, zoom has been in use for only a little over a century and a half. Originally, beginning in the 1850s, it was an onomatopoetic interjection. (OED: “Representing a zooming sound, as made by something travelling at speed.”) The intransitive verb—“to move or travel very quickly”—appeared in the 1880s; it acquired a specifically aeronautic sense (“to make a steep climb while flying at high speed”) around 1918.

With all these energetic associations, I wasn’t surprised to find 575 live trademarks that include ZOOM or the soundalike XOOM. In the healthcare field alone, there’s a Zoom+Care (“on-demand health care”), serving Oregon and Washington; and Zoom Insurance in Irving, Texas. LegalZoom (“Where Life Meets Legal”) was founded in 2001 with the goal of making legal help “available to all”; it offers flat-fee pricing and access to lawyers in many specialties. In several Canadian cities, you can rent a car from Zoom. Zoomifier, with offices in New York and Northern California, is “a partner dedicated to improving your sales performance!” Immune Zoom, from a company called Urban Moonshine, is touted as an herbal blend that gives “refined, reliable and unbeatable in the moment support to your immune system.” 1991 ad for Zoom guitar processor that uses the brand name as a verb (generally considered a trademark no-no). Via Pinterest. The company, founded in Tokyo in 1983 and with North American headquarters in Hauppauge, New York, is still in business.

For a generation of adults who were kids in the 1970s, “Zoom” evokes only one thing: a children’s TV show that aired on PBS. 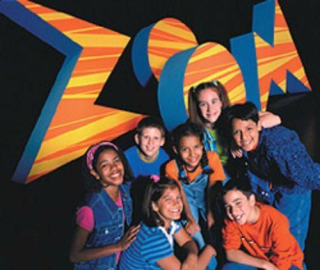 Inspired by educational shows like Sesame Street and The Electric Company, but designed to give the kids who watched it a voice without adults on screen, it was, for the most part, unscripted. Far from seeking to make stars of the child performers, their contracts prohibited them from making any television appearances or doing commercials for three years after they left the show.

Watch the intro. (Thanks, Jessica and Ari!)

The oldest live ZOOM trademark—and the first one I ever encountered, as a cereal-eating kid—is for instant whole-wheat cereal. The original manufacturer, Seattle-based Fisher Flouring Mills, appears to have been absorbed into another Seattle company, Krusteaz, although I haven’t been able to find out when that happened. 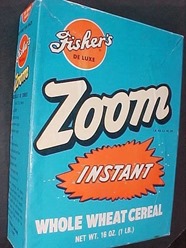 “Zoom-Zoom” has been a Mazda advertising catchphrase since 2000; the phrase is supposed to express the automaker’s “emotion in motion.” The original ads featured 10-year-old Micah Kanters whispering “zoom-zoom” over Spank’s version of the “Zoom-Zoom-Zoom” song originally recorded by Jibril Serapis Bey. (Wikipedia helpfully adds: “The song is not related to ‘Zoom Zoom Zoom,’ a 1958 doo-wop single by The Collegians.”) Mazda still has a “We Are Zoom-Zoom” page on its website.

One last zoom tribute: Aretha Franklin’s Who’s Zoomin’ Who? (1985), My pick for most-fun-to-say song title ever. The album of the same title included “Freeway of Love” and “Sisters Are Doin’ It for Themselves” In the lyric, “zooming” means checking out or scoping out.