we are just a frozen meat brand tweeting into the void hoping to provoke thought, inspire unity, and relay useful information. we are not an expert in anything or some beef god. we are a company with a bottom line being run by people. stay safe and be good to each other out there

Philadelphia magazine called the Steak-umm tweets “statesmanship on a roll”:

[T]he Steak-umm Twitter catapulted to the tippy-top of the social media heap via a feed of such surpassing sincerity and sweetness (“it’s impossible to keep up with the latest facts, relevant news, and still be a loving, available person with a job. misteaks will be made. that’s ok”) that thunderstruck observers — even the vegan ones — fell in love and penned paeans.

The Washington Post—which called Steak-umm “a guiding voice during this pandemic as it tackles issues like misinformation, partisan divides and the importance of science”—did some digging and discovered the human behind the Twitter account: Nathan Allebach, the 28-year-old social media manager at family-run Allebach Communications, the Pennsylvania marketing firm that handles the Steak-umm account. Allebach told the Post that he keeps “multiple running notepads of personal thoughts throughout the day that come from podcasts, articles, content creators, or just the ether, then I spend time following cultural trends and conversations on Twitter itself to see how I could insert any semblance of helpful dialogue into the mix based on those thoughts.”

So much for the news hook. What about the brand and its, umm, name?

If you’ve eaten Philadelphia cheesesteak, you’ve probably eaten Steak-umm, a frozen-meat product invented in 1968 by Gene Gagliardi, whose family owned Gagliardi Meats in West Philadelphia. The company was in a slump, and Gagliardi was working on a way to save it. The problem, as he saw it, was that the steak cuts weren’t tender enough. As a 2018 Mental Floss article put it:

Gagliardi thought he could soften up the meat by running it repeatedly through a meat grinder. “I did that about five times, extracting the protein out, and it became a solid mass. I couldn’t slice it, so I froze it and then put it back in the fridge for four days to temperate it, then sliced it.” Gagliardi had created a tender meat product that could be sold frozen and virtually eliminated the choking hazards of conventional Philly cheesesteaks.

[The Steak-umm was] from chopped and formed emulsified meat product that is comprised of beef trimmings left over after an animal is slaughtered and all of the primary cuts, such as tenderloin, filet, and rib eye, are removed, The emulsified meat is pressed into a loaf and sliced, frozen, and packaged.

The frozen meat slices were introduced in 1969 under the brand name Table Treats. By 1975, the name had been changed to Steak-umm. 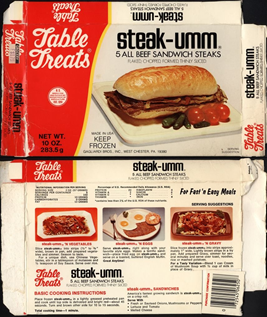 There seems to have been a period of Table Treats/Steak-umm overlap, as evidenced by this package from the 1970s. Thanks to Braulio Agnese for unearthing this image.

Why “Steak-umm”? In a direct message on Twitter, Nathan Allebach (I assume) said it was “a great question” to which he didn’t have an answer.

So I started looking at other words that end in -um, singular or plural.

“Um” is a placeholder in speech, also known as a “verbal dysfluency.” Um… is the title of a 2007 book by Michael Erard about “slips, stumbles, and verbal blunders and what they mean.”

Are we meant to think of Steak-umm as “umm ... maybe it isn’t steak”? Um, probably not.

Maybe it’s a term of endearment, like “snookums”? This definition comes from the Online Etymology Dictionary.

SNOOKUM brand diapers—sorry, nappies—are sold in in Australia and South Africa. (I can’t tell whether they’re the same or different brands.) 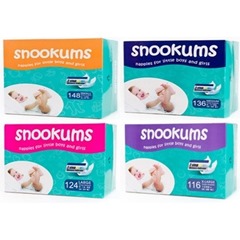 “Diddums” is a related baby-talk endearment, encountered mostly in the UK. Wiktionary says it’s a contraction of “did ’em [they] do something [to you],” and is used as a term of commiseration to a child.

No-see-um is the common name for a type of annoying biting insect (Ceratopogonidae). The “um” here is a shortening of “them.” 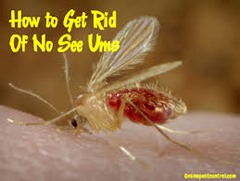 No-see-um is probably an example of what TV Tropes calls Tonto Talk: “a form of broken English characterised by the phrases ‘heap big’, ‘ugh" and "how’, and verbs conjugated with ‘um’”—partially under the influence of actual Native words like wampum. 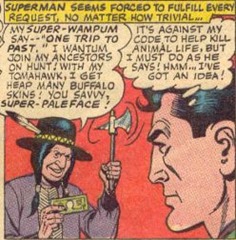 Speaking of TV, let’s not forget Sweetums, the fictional candy company in the fictional town of Pawnee, Indiana, in TV’s “Parks and Recreation.” Among Sweetums’s products: Fruityums, Icyums, and SwimmyYums (striped bass dipped in chocolate). 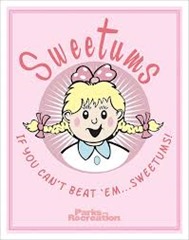 Is Steak-umm a cute little steaky-wakey? Maybe. But Ben Zimmer, responding to my Twitter query, had a different suggestion.

In fact, remember that 2012 lawsuit I mentioned earlier? Here’s what happened: Steak-umm sued Steak ’Em Up, a corner grocery and pizza shop in South Philadelphia, for trademark infringement and unfair competition. The judge found for Steak ’Em Up and dismissed Steak-umm’s claim. In the decision, he included this observation about the Steak-umm name:

The word “Steak” suggests a food product and the word “Umm” sounds like “mmm,” a suggestion that the product tastes good.

But hang on! There’s a footnote that appears to contradict this theory:

Mr. Gagliardi's colorful testimony included a description of the etiology of the Steak Umm name. Apparently, Mr. Gagliardi was quail hunting with two friends and focusing on the name of his new meat product more than he was concentrating on quail. After a period of quail hunting and bourbon drinking, one of Mr. Gagliardi's fed up friends expressed his frustrations with Gagliardi's elevation of product naming over quail shooting and shouted “F*ck ’em, stick ’em with Steak Umm!” From that moment, “Steak Umm” indeed stuck with Gagliardi and became the name of his new meat product. The catchy phrase, and the chance to memorialize a presumably high moment of male bonding gave birth to the Steak Umm name. It apparently has nothing to do with product quality, consumer appeal, taste or satisfying the appetite and everything to do with a memorable, if somewhat dubious, flourish.

Emphasis added. Steak ’Em Up, by the way, is still in business.

So which is it? As with those enigmatic, absurdist tweets, we may never truly know.

Tank top sold in the Steak-umm online store. The product copy reads: “Steak-umm bless is the smile in the face of danger, the strength in the presence of adversity, and the hope for a better, beefy world. It is a passing along of love whether or not the subject is worthy. A way of saying, ‘Go now and be blessed by an iconic frozen beef sheet.’”

Watch Steak-umm TV spots from the 1970s! (Thanks again to Braulio Agnese.)

Posted at 05:00 AM in Branding, Coronavirus, Food and Drink, How They Got That Name, Naming, Profanity, Suffixes, Twitter | Permalink