« On the Visual Thesaurus: Generations | Main | Word of the week: Allostatic load »

I downloaded the audio edition of the book through the Libby library app, which I love and recommend highly, and was delighted to discover that the reader, Heather Henderson, is a perfect match for the material. (I imagined her dressed and hatted like a wisecracking Jean Arthur or Joan Blondell in a late-1930s Hollywood comedy.) Henderson’s other audiobook work includes a curious specialty: Amish romances. Go figure.

A couple of personal announcements: I’ve been providing communications support for my friend Lolly Lewis’s terrific nonprofit startup, the Amateur Music Network. If you’re using your stay-at-home time to learn an instrument or practice your singing, or if you’d like to connect virtually with other amateur musicians for Zoom sessions or to trade notes (hah!), AMN is for you. We’re looking for guest blog posts: What are your musical challenges? What does being an “amateur musician” mean to you? And we’d love to see you on Twitter or Facebook.

From rhetoric and writing maven Jay Heinrichs, the best tips I’ve ever seen for unblocking writer’s block. My favorite one begins “Writing is not a bowel movement.”

John McIntyre, Baltimore Sun copyeditor and coiner of the terrific word peeververein, has written a new book with the excellent title Bad Advice: The Most Unreliable Counsel on Grammar, Usage, and Writing. Publication day is tomorrow, May 1. McIntyre is wise and witty, and you should buy his book. 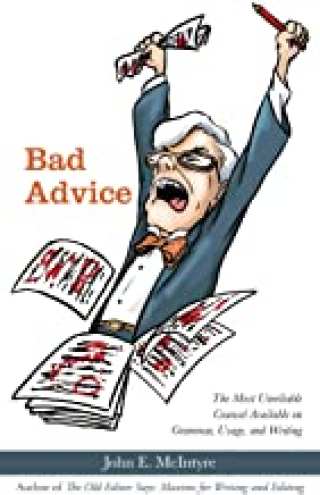 The wonderful Mary Norris, author and former copy editor at the New Yorker, writes about  two of my favorite word people, Grant Barrett and Martha Barnette, who have hosted the radio call-in show “A Way with Words” for sixteen (!) years. (It’s a podcast, too!)

Sports may be canceled, but the Name of the Year brackets soldier on, this time in a new home, the Unnamed Temporary Sports Blog. Your choices this year include some real pips: Mathdaniel Squirrel, Bluebell Eikonoklastes, Perfecto Cuervo, and the unbelievable-but-true Courvoisier Dingle.

Imagine getting the brief to write some copy on a fucking bin bag and then smashing it out of the park like this. Sensational effort. pic.twitter.com/TBXjnUaWsT

“Welcome to disastertising”: Amanda Mull on “how pandemic advertising got weird fast.”

“The Jets and Nets were both named to rhyme with Mets, although each was born under another name — the Jets as the Titans (also playing in the Polo Grounds and echoing the Giants), the Nets as the Americans. … [W]hen the American Football League began play in 1960, the team placed in L.A. (and long since relocated to San Diego) was called the Chargers because it sort of rhymed with Dodgers.” – John Thorn, official Major League Baseball historian

Momentous events like the one we’re living through are often reflected in baby-naming trends: Katrina spiked in 2005, after Hurricane Katrina; and inspirational names like Victor and Faith were popular in Britain during World War II. “Expect to see an explosion of creativity” in baby naming as the pandemic progresses,  the Namerology blog predicts.

Case in point: NancyCC reports on a newborn named Sanitizer.

“[British] house names from before 1200 often derived from the head of the household, like Ceolmund or Wærman, but by the fourteenth century, inspired by chivalric crests and religious imagery, they had titles like Le Griffon, La Worm, Le Dolfyn, and Le Harpe. During the Enlightenment, it became fashionable across Europe to name houses after a state of mind.” -- Sam Knight for the New Yorker 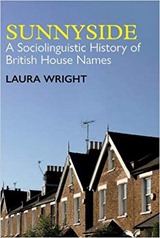 Sunnyside, by Laura Wright, the subject of Knight’s article.

There’s been a lot of reflection about our use of war metaphors during a medical crisis.

Calling medical professionals and other first responders "heroes" or "fighters" and using military metaphors like "war on coronavirus", "invisible enemy", and "front line personnel" set us up to be sacrificed like foot soldiers have been in every war. We are not heroes. /4

“Wartime rhetoric serves as an aggressive moral appeal, drumming up emotion and calling people to action,” writes Kate Yoder in Grist. “But here’s the thing about the war on coronavirus: We’ve already lost it.”

People still congregating in busy spaces saying ‘it’s the Dunkirk sprit’, need to understand that in this scenario they’re actually being the Luftwaffe.

War metaphors and beyond: Linguist Brigitte Nerlich looks at disaster metaphors (“epicenter,” “tsunami,” “storm”), “evil trickster” language, and metaphors to explain what to do about the virus, like “flatten the curve” and—love this one—“squash the sombrero.”

If we call this a war, people identify enemies. https://t.co/aT5JtfDnPw

One of my friends is reading The Magic Mountain, as indeed I did in my grad school days. I would not have thought I'd ever again want to read a book about a TB sanitarium, but you're making a pretty good case!

Thank you for the book recommendation! I wasn't aware that Betty MacDonald wrote books for grown-ups -- but you might mention that she is well known as a children's author (the wonderful Mrs. Piggle-Wiggle books). I've enjoyed reading those to my kids, so I look forward to checking out "The Plague and I"!

The first thing that popped into my head when i started reading this linkfest was a town near my Mom's house, Hygiene, CO (https://en.wikipedia.org/wiki/Hygiene,_Colorado), a cool town name from 1883. They had a sanitarium for TB patients. And that rabbit hole has Big Bug, AZ; Horse Thief Basin, AZ, oops, I think my needle got stuck again... Thanks for the Linkfest, this month!