Coronials. From @SciencesPoulet: “With the current quarantines, if in 9+ months there is a surge of the number of births, we’ll have to call that new generation the ‘Coronials.’” From “corona[virus]” + “millennials.”

Quaranteens. And what will they be called when they grow up? 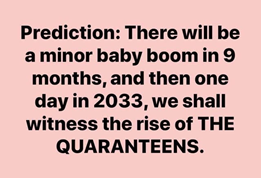 Gen Plague. Or maybe this, the contribution of Berton Averre, who wrote “My Sharona” for The Knack back in 1978.

“My Corona.” Speaking of that song, it was inevitable that there would be topical parodies. Here’s a fun one.

Coronatunes. Actress/singer/songwriter Rita Wilson and her husband, actor Tom Hanks, tested positive for COVID-19 and are quarantined in Australia, where they had been traveling. To pass the time, Wilson created a playlist that one of her followers dubbed “Coronatunes.” According to Twitter, at least three people had come up with the same portmanteau four days earlier. And the song suggestions keep coming.

Coronacation. Classes canceled? Forced to work from home (WFH)? Congratulations: you’re on coronacation. I learned the word from Edward Banatt, but lots of other people are using it, too.

COVIDeo Party. After you’ve run through all your Coronatunes, you could throw yourself (and only yourself) a Covideo Party. Start with Contagion (2011) and proceed from there. The appropriate hashtag is #RonaAndChill – Rona being how the cool kids truncate “Corona.”

#CovideoParty is incredibly fun and hilarious to read on twitter, but it's also a really cool example of how social media can bring people together during bleak times.

Nice to be connected, if even just for a little while.

Iso bro. Hat tip to self-isolating Jay Caspian Kang for this one.

As an ‘iso bro’ I look forward to viciously slandering my normie opponents and being written about in several major publications. Starting a podcast and patreon.

Flu bro. Don’t be that guy who insists “it’s just the flu lol why is the media panicking.” Related: Curlbro.

Herd bro. Don’t be this guy either. Herd immunity occurs when a high enough percentage of a population is immune to a disease either through vaccination or prior exposure—neither of which has happened with COVID-19 because it’s a novel coronavirus, not the kind that causes the common cold. Last week the UK government’s chief science advisor unscientifically recommended exposing lots of people to COVID  to “build up some kind of herd immunity”; by the weekend, the secretary of state was saying oops, bad idea, never mind.

Flubros are so three days ago. Things are moving fast. Now we have to deal with the herd immunity herdbros who want to expose us all and let the virus decide Thanos-style.

Coronadouche. And by all means don’t be that guy.

This guy earned a new portmanteau: #coronadouche
He Has 17,700 Bottles of Hand Sanitizer and Nowhere to Sell Them https://t.co/vz87CpYFNp

Hamsterkaufen. And please don’t do this, either. As Mike Pope explains in his Friday Words post, hamsterkaufen is German for “hamster buying”: hoarding purchases as a hamster stuffs its cheeks with food. The English equivalent is “panic buying”—as we’ve seen with yon Coronadouche and all those toilet-paper stocker-uppers—but I agree with Mike that hamsterkaufen is much more evocative and needs to be adopted into English as we’ve done with kindergarten and schadenfreude.

Speaking of furry animals, you’ve probably heard by know that all these precautions are intended to flatten the curve: to slow down the progress of the pandemic so that hospitals and healthcare workers aren’t overwhelmed. If that sounds too dry, here’s a cuter way to think of it: cattening the curve. 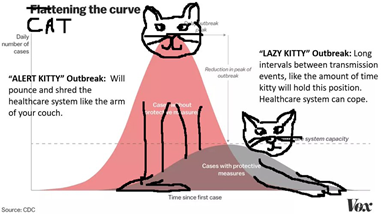 Stay #ronawoke, my friends! And wash your damn hands.

Covidiot: A person who, in a time of crisis, hoards food and essential supplies and denies them to those in need. Blend of COVID and idiot. Earliest definition in Urban Dictionary: March 14, 2020.

So this woman not only buys out a local Dollar Tree of every single box of paper towels, napkins, and toilet paper so that no one else can buy any, but caps it off with this:

Posted at 05:00 AM in Coronavirus, German, Medicine, Music, Neologisms, Portmanteaus, Word of the Week | Permalink

I don’t think I saw “pandumbic” on the list — coined (I believe) by The Daily Show.

Two new coinages for future novels in next decade about living in the covid19 crisis ..."corona-fi" and "corona-lit"

Sdjewishworld.com search window has recent article on the terms

Aaron: I saw "corona-fi" in my email inbox this morning! I'm sure we're going to continue to see other coinages.

Adrian: In my follow-up column for the Visual Thesaurus (paywalled for three months, sorry), I discuss both coronageddon and coronapocalypse, along with other coinages not covered here. https://www.visualthesaurus.com/cm/wordroutes/new-virus-new-words/

I learned of The Mavericks (musicians) this weekend. How did I miss that for the last thirty years. The Mavericks songs are on at least several quarantunes playlists. Quarantunes?!? songs to listen to during the quarantine? How did I miss that too? This feels like the day i found out that everyone knows about Santa Esmerelda and Chuck Mangione. I thought they were my secret vices, my guilty pleasures. But everyone likes them. It is true, i am not hip!