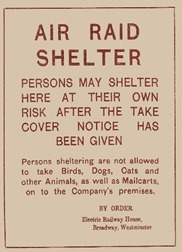 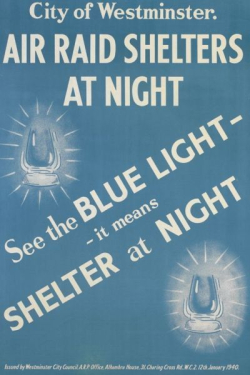 Air-raid-shelter sign with catchy slogan used in London during the Blitz.

The origins of shelter are, alas, “obscure,” according to the OED. It appeared in print only in the late 1500s, when it meant “a structure affording protection from rain, wind, or sun” or, more broadly, any refuge. It may have come from shield plus the suffix -ure as in jointure, or from an obsolete word, sheltron, that has an Old English source and meant a military phalanx. Shakespeare used shelter multiple times in his plays, in both its literal and figurative senses. (“And thou shalt prove a shelter to thy friends.” – Henry IV, Part 2.) 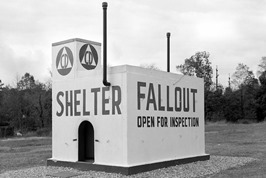 “1950s Civil Defense Fallout Shelter Sample Open for Inspection,” a photographic print available for sale at Wayfair. The OED’s earliest citation for fallout shelter is from 1961, but the structures themselves existed several years before that date. 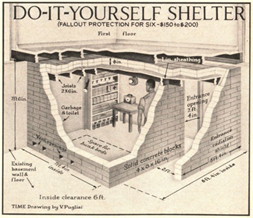 A DIY fallout shelter. In Cold War America, “some people believed that a ‘fallout shelter’ — as opposed to a ‘blast shelter’ — might still be able to save the lives of people who were farther away from the impact but who would have otherwise been affected by the aftereffects of a nuclear attack.” Time, August 11, 2017

Fifty years after the height of the Cold War, Fallout Shelter became—what a lark!--the name of a free-to-play video game.

In Fallout Shelter, players build and manage their own Vault as an Overseer – the leader and coordinator of their Vault. Players guide and direct the citizens of the Vault, known as dwellers, and need to keep them happy through meeting their needs such as power, food, and water. They rescue dwellers from the wasteland and assign them to different resource-generating buildings in the Vault, using the SPECIAL statistics system from the other Fallout games.

Animal shelter—a place of refuge for stray pets—is “originally U.S.,” according to the OED, which documents its usage only from 1971. The human sense of shelter “for the homeless poor” is quite a bit older, dating back at least to 1890.

The as-yet-unreleased Animal Shelter Simulator “grants you the opportunity to tackle the challenging but also highly rewarding task of running a refuge for strays and rescues.”

If we survive COVID-19, what are the odds that shelter-in-place is also gamified?

Posted at 05:00 AM in Coronavirus, Current Affairs, Medicine, Word of the Week | Permalink

I'd like to think it would be years before we had enough distance, objectivity and humor about COVID-19 before "S_I_P—The Game" hit the figurative shelves.
But I wouldn't be surprised to learn that there are 20 versions out now. This is capitalism, after all.