Scourge is a word with antique and religious resonances. It came into English from French in the 13th century as both a noun and a verb meaning “whip”; its Latin root is excoriāre, to strip off the hide. (It’s unrelated to scour, which seems to have an Old Norse origin.) In English translations of the New Testament, Jesus is “scourged”—flagellated—before his crucifixion.

By the 14th century, scourge was used figuratively to mean a figure of divine chastisement; by the 16th century its sense had expanded to include “a devastating disease.” We still see references to, say, “the scourge of polio.” 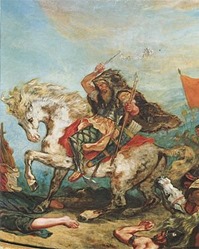 Attila the Hun, known by the time of his death as “the scourge of God.” Painting by Delacroix.

Trump isn’t the only one coupling “coronavirus” or “COVID-19” and “scourge.” The New York Times has used it repeatedly, alternating with “pandemic.” The Washington Post relies on it, too. The word’s brutal associations and, perhaps, its echo of surge remind us of the disease’s deadliness and scope. If we’re going to press it into service, let’s honor its pronunciation.

Scourge of the Underworld, a Marvel Comics character created in 1985 “as a plot device intended to thin the criminal population of the Marvel Universe.”

Posted at 05:00 AM in Coronavirus, Medicine, Pronunciation, Word of the Week | Permalink

Emily Dickinson once rhymed “scourge” with “judge” — but (a) I’m sure she knew the correct pronunciation of “scourge,” and (b) she knew what she was doing. Most certainly, Dickinson had an appreciation and a command of the language. She was a songbird with beautiful and haunting melodies and inventive harmonies. Trump — who can barely read — is a toad. He can merely croak.

Jim: You're the Dickinson expert, but I seem to recall that she used slant rhymes quite a lot.