« How Opening Ceremony got its name | Main | New writing: The names of diseases »

Word of the week: Kludgeocracy

I was sure I’d already written about kludge here, but it turns out I’d only linked to a 2016 article about the word’s complicated etymology. (That article, by Adrienne LaFrance, quoted Ben Zimmer: “The short answer is that the word was originally spelled ‘kluge’—derived from the surname Kluge, in turn from German klug, ‘clever.’ But then later it began to be spelled as ‘kludge,’ merging with a U.K. slang term with that spelling (apparently derived from a Scots word for ‘toilet’). So now we often get the ‘kludge’ spelling with the ‘kluge’ pronunciation.”) So when I encountered a chapter titled “The Kludgeocracy” in Annie Lowrey’s 2018 book Give People Money—a defense of universal basic income, or UBI*—I figured it was time for a more thorough exploration.

A kludge or kluge—rhymes with judge and stooge, respectively—is a temporary workaround, “a clumsy or inelegant solution to a problem.” The term may have originated in the 1930s, perhaps as a reference to Brandtjen & Kluge printing-press equipment, which had a reputation for being … klugy. According to the Jargon File, a compilation of hacker slang, the term was appropriated by the US Navy during World War II and in the 1960s by computer programmers. Governments are, of course, riddled with kluges: patches to the tax code; the entirety of the welfare and health-care systems.

Lowrey doesn’t define kludgeocracy, possibly assuming that its meaning is self evident. Aside from the chapter title, this is all she has to say about it: “The Indian government runs not a slender, bureaucratically nimble set of antipoverty efforts, but a kludgeocracy, in the memorable neologism of the political scientist Steven Teles of Johns Hopkins University.”

Teles used kludgeocracy—kludge plus the -cracy suffix, meaning “government” or “rule”—in a 2012 paper published by the New America Foundation, a left-leaning think tank. In the paper, Teles criticized America’s “crazy quilt of savings incentives—401(k)s, IRAs, 529 plans, and all the rest—and the “multiple, overlapping, bewildering different federal programs for K-12 education,” among other examples. Democrats and Republicans were equally culpable, he wrote: “While liberals are harmed by the opacity of kludgeocracy’s successes, conservatives are hurt by the lack of traceability of its failures.” 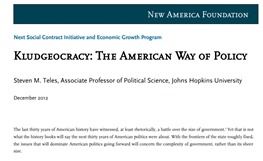 In a 2013 interview published in the Washington Post, Teles went into more detail:

I argue that kludgeocracy is what you get when you combine a political culture in which market solutions have a certain prestige and in which the public simultaneously thinks there are a large number of areas that are legitimate subjects of public concern. If we were market-oriented and the public thought we should just let the market rip and see where the chips fell, that might not be a just society (I don't think it would be), but it wouldn't be a kludgeocracy. It's the attempt to preserve our market orientation and be a kind of welfare state that creates the problem.

Kludgeocracy isn’t the only noun-extension of kludge. The OED defines kludgemanship as “skill in designing or applying kludges.” (From Datamation, February 1962: “It is in the lashing together of whole modules of equipment that the opportunity for applied kludgemanship presents itself to the hilt.”)

And here’s an ad in the December 10, 1973, issue of New York Magazine for Malice in Blunderland, a book that “demonstrate[s] definitively why every bureaucracy tends inexorably toward kludgification and ultimate stasis.” 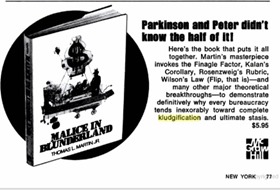 Thanks to Garson O’Toole, whose post on the American Dialect Society’s listserv pointed me to this ad.

* UBI was a central theme in the campaign of Democratic presidential candidate Andrew Yang, who called it the “freedom dividend.”

Posted at 05:00 AM in Government, Word of the Week | Permalink