On Feb. 19, Mr. Edler, 27, and more than a dozen others set out for a 25-day adventure: rafting the Colorado River through the Grand Canyon — a trip so coveted it requires a permit won through a lottery. When they left, President Trump had recently granted clemency to Rod Blagojevich, the disgraced former Illinois governor, and Bernie Sanders had a double-digit polling lead heading into that night’s Democratic debate in Las Vegas. Cases of the coronavirus were showing signs of decline in mainland China and the Centers for Disease Control and Prevention issued its first Level 1 travel notices — “practice usual precautions” for travelers heading to Hong Kong and Japan.

By last Saturday, March 14, as they took the last paddle strokes of their journey, Mr. Edler and his friends were some of the last people on the planet unaware that the novel coronavirus had exploded into a once-in-a-generation pandemic, setting off a global health and economic crisis and shutting down large parts of American life. In moments, the man waving to them from the banks of the river would tell them that the world they were returning to looked vastly different. 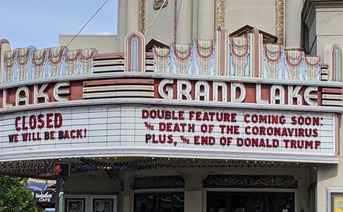 My neighborhood cinema, the Grand Lake Theater, on March 16. The Art Deco landmark had celebrated its 94th birthday on March 6.

How fear can spread like a virus, by Eva Holland. (Time)

Our fear is a finely calibrated alarm system, more like a smoke detector than a disease. At this fraught moment, it makes sense to listen to its siren: not to panic, but to heed official medical guidance and prepare. 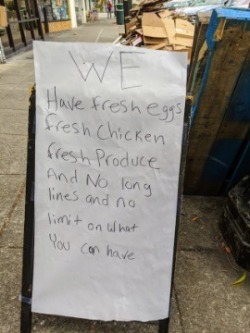 “No long lines and no limit on what you can have.” Oakland Kosher Foods, March 18.

When your life is no longer conducted in public, writes fashion critic Robin Givhan, you lose an important means of communication: your clothing. (Washington Post)

An essential part of our identity is rooted in how we relate to the people around us, how we situate ourselves within the social hierarchy. We are defined, in part, by our tribe. We dress to tell a story about ourselves and if there is no one there to hear our narrative, we’ve been put on mute — turned into mere ectoplasm in pajamas. 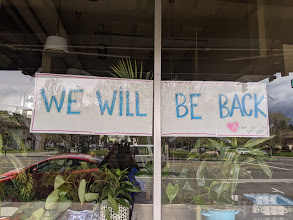 It’s tempting to read symbolism into the coronavirus, writes Paul Elie. But we shouldn’t. (New Yorker)

In retrospect—in the rueful retrospect we are living in already—we’ll say that the virus was there all along, in the circumstances that enabled it to spread. … It was there, most blithely, as an expression of the reach and spontaneity of social media. We watched as cat videos, practical jokes, blunders, over-the-shoulder half-court shots, and celebrity meltdowns all went “viral.” And it was there in the notion that those who could make things go viral were to be celebrated, cultivated, compensated, imitated. The term devised for them—we realize, in rueful retrospect—has a distinct echo of the worst virus of modern times, the influenza pandemic of 1918. They were called influencers.