In the Old Testament story of David and Goliath, a young man confronts a Philistine giant who has terrorized the people of Israel. No one thinks there is any hope of taking on Goliath until David steps forward. Rejecting the offer of heavy body armor because it weighs him down, David instead faces the outsize enemy armed with just his trusty slingshot and five smooth stones. With one well-aimed shot and against all odds, he takes Goliath down.

This is the tale Diane Ravitch alludes to with her title, “Slaying Goliath,” and the choice is apt. She has written a thought-provoking, painstakingly researched account of those who have sought to privatize and monetize America’s schools. She calls them the “Disrupters,” and they are indeed a foe with all the intimidating strength of Goliath. Confronting this opponent is the “Resistance”: the ordinary teachers, parents and citizens who are fighting back and winning.

Oh, right: Goliath, by Matt Stoller, which I read last year shortly after it was published. 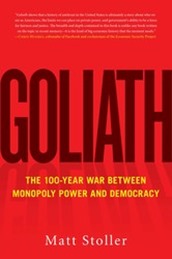 Then there’s Malcolm Gladwell’s David and Goliath (2013), essays about “the art of battling giants.” 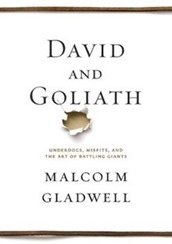 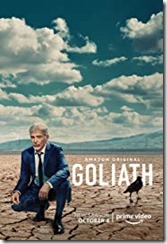 And those of you raised on Christian kids’ TV may recall “Davey and Goliath” (1960-2004), a clay-animation series originally produced by the United Lutheran Church in America. (1960-2004). Goliath is the name of Davey’s dog. 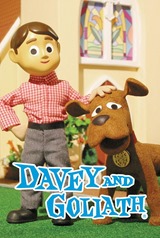 And how could I omit vsGoliath, a branding agency in San Francisco (owned by David Gartner) with which I have partnered on naming projects?

The name “Goliath”—Golyath in the Hebrew Bible—is something of a mystery. (For historical and archaeological background, see this article in Haaretz.) Chaucer and Shakespeare spelled it “Golias”; it was also often spelled “Goliah” as late as the 19th century. The first recorded citation as “Goliath” is from 1846.The Nameberry baby-name website claims that it’s “a boy's name of Hebrew origin meaning ‘exile,’” which is, as far as I can tell, erroneous on two counts: It isn’t Hebrew, and it doesn’t mean “exile.” (Nameberry seems to have conflated Goliath and galut, a Hebrew word that does indeed mean “exile” and is the standard term for what English-speakers call the Jewish diaspora.) An entry in the Jewish Encyclopedia (1906) gives a very different etymology: “The name ‘Goliath’ is probably connected with the Assyro-Babylonian ‘Guzali’ = ‘running, ravaging spirits,’ ‘destroyers.’” And a third interpretation gives a “possible” meaning as “uncover, reveal.”

“Goliath” has had a robust life outside the Bible, literature, and entertainment. It’s the name of a genus of large beetles (Goliathus), a large heron (Ardea goliath), a large frog (Cyclorana goliath). and a spider (the goliath bird-eating spider, a type of tarantula that is the largest spider in the world by mass and span). 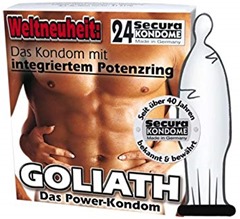 Goliath ale, from Wychwood Brewery in the UK, is made with “a hefty whack of Fuggles & Golding hops.” (Zany hops names are surely a topic for another post.) Its slogan is “The Beer to Slay a Mighty Thirst.” So shouldn’t it be called David ale? 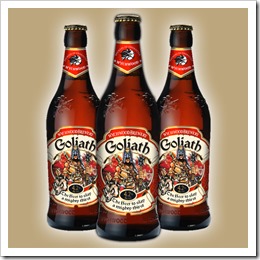 A US brewery gets the slaying part right: Toppling Goliath Brewing Co., in Decorah, Iowa, makes beers with names like Pseudo Sue, Mornin’ Delight, and Fire, Skulls, & Money, the latter of which contains 7.2% ABV, which is pretty massive. 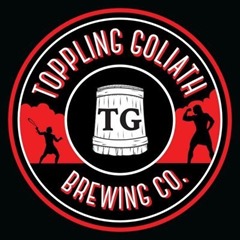 The oldest GOLIATH trademark in the database—registered in 1924 and still in use—is for a large Hohner tremolo harmonica (“The Up to Date”). A pre-1980 model will set you back between $10 and $75.

The thing about David ale is, after two or three or seven you want to golieth down.