« Huge | Main | On the Visual Thesaurus: The language of suffrage » 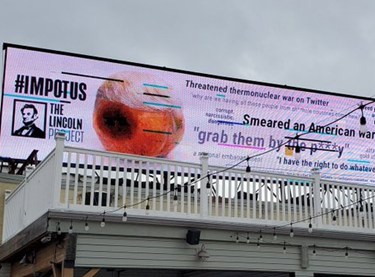 Keep in mind that this is outdoor advertising. It’s high above street level, and even if you’re cruising by at a stately New England pace, you’ll have mere milliseconds to process the … what shall we call it? Content? Verbiage? How about shitshow?

It’s only slightly better in print.

The ad appeared in the New Hampshire Union Leader.

At least with the print version you can tell, sort of, that the hairy orange eyeball thingy is meant to be a peach. (And I think it’s a peach to suggest “impeach,” but frankly, your guess is as good as mine. Is that a bruise? A spot of rot? And why? I don’t dare to think about it.)

Here, to enumerate what should have been obvious to its creators, is what’s wrong with the billboard:

2. Too much type. Four or five words are about all our brains can process when we’re moving at automobile speed. Billboards call for slogans, not manifestos.

3. No call to action. What’s the point? What does the Lincoln Project want us to think and do? There’s no strategy here, so there’s no impact.

Let’s say the billboard cost $2,500 (the median cost of billboard rental in small to midsize cities). That’s $2,500 flushed down the toilet—$2,500 that could have been spent on a hard-hitting, memorable ad that made New Hampshire voters stop, think, and maybe change their minds.

I want to be pulling for the Lincoln Project. But if its founders intend to make waves, they’re going to have to bring their messaging up to a professional level.

* It pains me to point out a rookie error in the website: The link to “our feature in the New York Times” goes not to a feature story but to an op-ed piece by four of the Lincoln Project’s founders. Opinion pieces are not “features.”

** And did you spot the missing word in the tweet? And what’s up with “warm welcome,” when that clearly isn’t the intended message?

Posted at 05:00 AM in Advertising, Bad, Negative, Politics, What Does It Mean? | Permalink