The Brits like to blame Americans for annoying buzzwords, but workstream appears to be as popular in the UK as in the US—and maybe even more so. Standard dictionaries aren’t a big help here. Neither workstream nor work stream is yet in the OED or in Merriam-Webster, a standard US dictionary. The Macmillan Dictionary, which uses lexicographers from the UK and the US, provides a crowdsourced definition submitted from the UK: “any one of the areas of activity into which a company’s business can be divided. Collins Dictionary, published in Scotland, gives a definition of workstream “in British English” only.

Still, workstream is not unknown in the US. It’s used, for example, by devotees of agile software development. A May 2018 article in the Harvard Business Review informs us that “implementing agile at scale requires modularizing and then seamlessly integrating workstreams,” and good luck with that, amirite? Kumanu (“Building Stronger Organizations”), based in Michigan, advises that agile marketing managers “should take into account the workstreams of their cross-functional helpers so progress is not stunted.” Indeed.

There is a Workstream company based in San Francisco that calls itself “the most trusted automated hiring platform”—a different interpretation of “stream of work” than the ones cited above. The novelty gift company TenTonTitmouse, based in Brooklyn, sells a workstreams buzzword mug for $14.95. 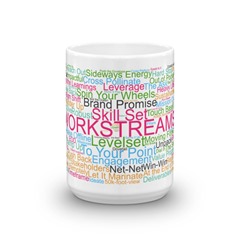 Rob O’Byrne, a management consultant in New South Wales, Australia, would prefer that you not use workstream at all. In a 2016 blog post, he called it “a consulting buzzword to beware of,” adding: “No amount of spell-check cheating will change the fact that workstream is not a real word, at least not until it is added to the Oxford English Dictionary.”

Protestations to the contrary notwithstanding, I’m not surprised that workstream has worked its way into our vocabulary. It’s compounded from two Old English words, which makes it accessible rather than abstruse. And we love our stream metaphors in English: They suggest progress in an unobstructed, unidirectional flow (unlike the give-and-take of, say, ocean tides). A mainstream (1660s) was originally the principal current of a river, and has had a figurative sense since the 1830s. (“Mainstream media” came along in the 1980s.) We’ve had bloodstream since the mid-1800s and stream of consciousness (credited to William James, the father of American psychology) since 1890.

In computer lingo, to stream has meant “to transfer over a network” since the early 1980s. (Bitstream—a stream of data in binary form—goes back to the early 1960s.) The first livestream took place in 1993 at Xerox PARC when engineers broadcast a set by the band Severe Tire Damage over the internet.

As for the Sussexes, they’re a little vague about their own workstreams, other than “providing our family with the space to focus on the next chapter” and “the launch of our new charitable entity.” Along the way, they also intend to become financially independent, which sounds like an admirable if fuzzy goal. Will Meghan return to her acting career? Will Harry lend his famous face to more documentaries? Will the family sit back and cash in on Sussex Royal trademarks? As the saying goes: Nice workstream if you can get it.

* It wasn’t just the Times. The Washington Post breathlessly reported the couple’s “fairy-tale escape”; in Toronto, the Star called last week’s announcement “a modern fairy tale.” The tabloids were even moonier. For a satirical take closer to my own, read Alexandra Petri and Jessica M. Goldstein: “Honestly, I, Meghan Markle, Have Been Plotting This My Entire Life.”

Posted at 05:00 AM in Buzzwords, Current Affairs, Word of the Week | Permalink