The first part of the phrase, OK, is America’s most successful linguistic invention. As Allan Metcalf wrote in his 2010 book OK: The Improbable Story of America’s Greatest Word, OK “is said to be the most frequently spoken (or typed) word on the planet, bigger even than an infant’s first word ma or the ubiquitous Coke. … It’s America’s answer to Shakespeare. It’s an entire philosophy expressed in two letters.” (I wrote about Metcalf’s book in a 2010 post.) In OK boomer and elsewhere, OK can be a verbal shrug, signifying acknowledgment well short of enthusiasm. Or, as in OK boomer, it can be the equivalent of a sarcastic raised eyebrow.

As for boomer, it’s a clipped form of baby boomer, a member of the post–World War II baby-boom generation, born between 1946 and 1965. Baby boom wasn’t a new term then: the OED’s earliest citation is from an 1880 article about “the Iowa baby boom” in the St. Louis Globe-Democrat. But baby boomer came much later. When Landon Y. Jones suggested The Baby Boomers as the title of his landmark 1980 book about the generation’s impact on society, his publisher balked: “No one knows what that means. It will confuse booksellers. They will shelve it under Child Care.” The book ended up being called Great Expectations (“Dickens be damned”). In fact, as Jones noted in 2015, the phrase baby boomer had already appeared in print three years earlier, in a Washington Post Outlook essay about the future of the world economy. But it took Jones’s book for the term to enter popular discourse. 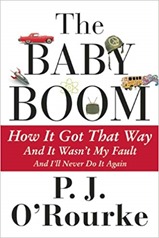 Boomer had already had a lively slang history before being conjoined with baby. In the mid-19th-century Southern US, a mountain boomer was a mountaineer. Later in the century, a boomer was anything big and successful (“This sale will be a boomer”); a participant in a land rush (“The ‘boomers’ have been driven from Oklahoma by Federal troops”); or a drifter who makes a living in areas of sudden business prosperity (“I became a ‘boomer’ brakeman”). In 1950s surfer slang, a boomer was a heavy, unrideable breaker. Beginning in the 1970s, boomers could be thunderclouds. A boomer is also an adult male kangaroo.

According to the Random House Historical Dictionary of American Slang (which is the source of the quotes in the previous paragraph), boomer as shorthand for baby boomer first appeared in print in the May 23, 1982, issue of the Lompoc (California) Record’s Family Weekly section: “In the 1960’s, the first wave of boomers hit adolescence and gave us the youth society.” In a December 2019 language column for the Wall Street Journal, Ben Zimmer reported that boomer sans baby was in use as early as 1974, but he doesn’t provide a citation. [UPDATE: In a tweet, Ben provided the source of the bare boomer reference: an article about the “youth market” in the January 14, 1974, edition of the Philadelphia Inquirer.) 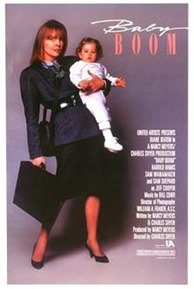 Boomer was originally generation-specific, but OK boomer is more generic. As Ben Zimmer writes, for members of Generation Z, born between 1995 and 2015 and sometimes called (sorry) Zoomers:

“boomer” can be applied to anyone older who has a condescending or out-of-touch attitude toward young people and their concerns. As my Gen Z son puts it, “It’s not an age group—it’s a mind-set.” (Confusion over what exactly “boomer” means now is reflected in “what is a boomer” being one of Google’s top searches in 2019.)

Or, as Taylor Lorenz put it in an October 2019 story for the New York Times:

“Ok boomer” has become Generation Z’s endlessly repeated retort to the problem of older people who just don’t get it, a rallying cry for millions of fed up kids. Teenagers use it to reply to cringey YouTube videos, Donald Trump tweets, and basically any person over 30 who says something condescending about young people — and the issues that matter to them. 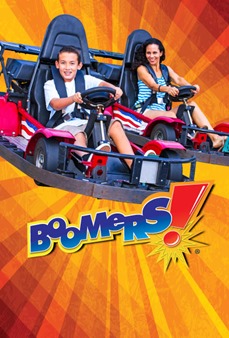 Boomers! is a chain of “family fun centers,” founded in 1998, in California, Texas, and Florida. The name seems to conflate several meanings of boomer: big waves, big fun, cross-generational appeal.

The OK boomer template is already proving to be adaptable. New York Times opinion columnist Farhad Manjoo argued in November that “‘Ok billionaire’ is a better rallying cry than ‘Ok boomer.’” I’ve even seen OK tumor, which may or may not indicate cancer acceptance.*

There are men and boys alive today whose parents named them Boomer, often to honor one particular Boomer: retired NFL quarterback Norman Julius “Boomer” Esiason. Mel magazine got in touch with a bunch of them to find out what they thought about OK boomer. “It’s unique and memorable,” said one of them, overlooking the fact that he was one of four “unique” Boomers interviewed for the article. 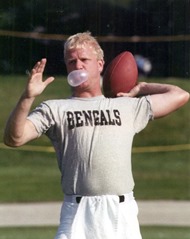 Esiason “got the ‘Boomer" nickname before he was born. His mother Irene, reacting to his constant kicking in the womb, called him ‘Boomer,’ and he has kept the name since.” (Wikipedia)

From the '80s, when I played a computer game, 688 Attack Sub,I thought of "boomer" as a type of submarine. But, you did not get a participation award for playing or winning that game. See: https://www.navy.mil/navydata/fact_display.asp?cid=4100&tid=200&ct=4