Some background: Roman calls itself a digital health clinic for men; it partners with physicians to provide online advice and pharmaceutical help for a range of medical conditions—not just ED but also hair loss, herpes, and heart health, among others. Roman was founded in 2017 and quickly expanded (thanks to big infusions of cash) and diversified into other healthcare verticals. In September 2018, the company launched Zero, an online smoking-cessation program; in March 2019, it launched a health service for women called Rory (hot flashes, insomnia, inadequate eyelashes). At some point, possibly in 2018—I haven’t been able to pinpoint a date—the founders created Ro as an umbrella brand for the three verticals. 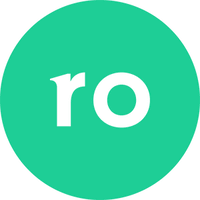 Ro.com has been registered to Alibaba, in China, for many years. The WhoIs record suggests that Ro.co—the rhyme is a good mnemonic—was transferred to the American Ro in July 2019. Ro did manage to land the Twitter handle @ro.

There’s a nice naming strategy at work here. RO is the nucleus; the three satellite brands incorporate /RO/ in their names, which are all “real” (dictionary) words. There are further /RO/ extensions: the ROAR blog at Rory, a ROMANHOOD Q&A page at Roman.

How did the strategy come about? I don’t know; Ro and Roman don’t tell their name-origin stories.*

But I’m going to speculate anyway. 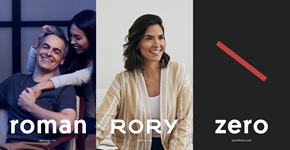 There’s a new fourth product that doesn’t fit the pattern: the weight-loss aid Plenity, which was acquired through a partnership with another company, Gelesis.

First, never discount the copycat effect. RO is the first syllable of two big, well-known brands: the streaming-TV platform Roku (Japanese for “six”; Roku was the sixth company its founder started) and—perhaps more to the point—Rogaine, the most familiar consumer brand of the hair-loss treatment minoxidil. Pharmaceutical companies are famously tightlipped about the significance of trade names, but it doesn’t take a genius to see gain and a scrambled-and-abbreviated grow in Rogaine.

Finally, take a look at the names of Ro’s three founders:

In case it’s not immediately apparent: The first two letters of Rob are R and O; Reitano begins with R and ends with O; Rahmanian begins with R.

I have a theory, borne out by my 20-plus years as a professional name developer, that whatever else they may say about what they want in a corporate or product name, what founders really want is a name that reflects their own identity.** In other eras, founders simply named their companies after themselves: think of Ford, Carnegie, Kaiser, Sears and Roebuck, Abercrombie and Fitch. That’s not the fashion now***, but the urge to see your own name on buildings and stock certificates isn’t easily suppressed. So the references become more elliptical: Stewart Butterfield founded Slack, Caterina Fake founded Flickr, Ethan Brown founded Beyond Meat.

In case you think I’m pulling this stuff out of the ether, it’s supported by psychological research. According to the implicit egotism theory, there’s a greater than random likelihood that a person’s first name will predict his or her career: Dennis and Denise gravitate toward dentistry; Lawrence and Lauren become lawyers.

Then there’s the name-letter effect, which is the tendency of people to prefer the letters of their own name over other letters of the alphabet. (This holds true across a range of languages.)

When founders name their own companies, either or both of these principles may play out, often unconsciously. When naming consultants get involved, it’s a good idea to at least consider the attraction of a company name that flatters founders’ egos and supports their preference for their own names.

Is this cynical? Not at all. Sometimes good names come from looking outside; sometimes they come from looking inside. We’re all susceptible to implicit egotism. The trick is translating that egotism into an effective story and marketing strategy, as Ro and its offspring have done.

* Zero is pretty transparent, and, as I’ve written previously, very popular in brand naming. The corporate name Rory is said to be a short form of Aurora, the Roman goddess of the dawn. (I am unpersuaded.) Rory is also the Anglicized form of the Gaelic name Ruari, which means “the red-haired one”; in recent years Rory has spiked as both a boy’s and a girl’s name, possibly influenced by the character Rory Gilmore in “The Gilmore Girls.”

Posted at 05:00 AM in How They Got That Name, Medicine, Men, Naming, New Name Beat, Nicely Named, Pharmaceutical, Psychology | Permalink