Bedbug. There was a positive infestation of the wee blood-suckers, real and metaphorical, in civic discourse this year. In August, employees of the New York Times received a memo letting them know that bedbugs had been discovered in one of the paper’s “wellness rooms” (yes, really) and elsewhere in the building. Also in August, the eponymous owner of the Trump National Doral Golf Club, in Florida, insisted publicly that his establishment was bedbug free, even though the club had settled with a bedbug-beset patron in 2017. In October, a professor at George Washington University tweeted a joke that compared Times opinion columnist Bret Stephens to a bedbug. Stephens was not amused. Finally, as House impeachment hearings were getting under way in November, the abovementioned club owner told a Fox and Friends host that Speaker of the House Nancy Pelosi was “crazy as a bedbug.” This sounded to me like random word association, but it turns out that “crazy as a bedbug” is an idiom of long standing.

Canceled. Disagree with someone? Find their views repugnant? At one time you could simply have ignored them and gone about your business. Now you must announce that so-and-so is canceled. According to a Psychology Today article published on December 1, canceling increases the canceler’s social status while decreasing the status of one’s enemies. It’s a secular version of religious shunning or excommunication. Cancel comes from a Latin source that meant “to cross out something written”; it’s etymologically related to carcel, Spanish for “prison.”

Complexifier. Did Jeff Bezos invent this word in his public letter to the publisher of the National Enquirer, published on Medium in February? No, he did not, but language nerds (including yours truly) had a lot of fun investigating.

Hamberder. In January, the eponymous owner of the Trump Doral Golf Club served fast-food takeout at the White House to members of the Clemson Tigers football team. His proud tweet—later deleted—included a typo that did not go unnoticed. 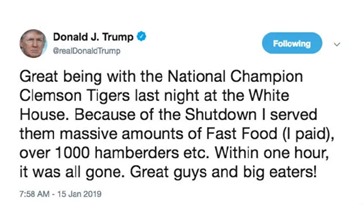 due to a large order placed yesterday, we're all out of hamberders.
just serving hamburgers today.

I'm going to try to stay off this hellsite for the holiday break, and read and write and spend time with my family. But before I go, some intermittent notes about the year:

Anyone else gonna try and spend less time on this hellsite in 2020?

Despite all the ugliness, the thing that keeps me on this hellsite are all the damn cool-ass people.

Cheers to you guys.

*Impeachment. On December 18, 2019, Donald J. Trump became the third president in US history to be impeached in the House of Representatives. As of this writing, the two articles of impeachment have not been sent to the Senate, where the trial would take place. *Word of the year. 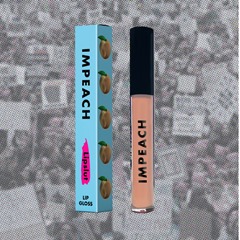 Impeach lip gloss from Lipslut: “the peach you’ve been waiting two years too long for.” More about Lipslut here.

Likability. Women in the public eye—politicians, actors—have to have it; they may even hire likability coaches to improve their likability quotient. Men, not so much. With a record number of women running for the Democratic presidential nomination, we heard a lot in 2019 about the likability “trap.” And it was newsworthy when Jennifer Aniston, in her role in the new Apple TV+ series “The Morning Show,” “DGAF about likability,” as critic Willa Paskin put it. 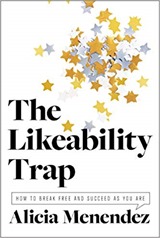 The Likeability Trap (November 2019) “delivers an essential examination of the pressure put on women to be amiable at work, home, and in the public sphere, and explores the price women pay for internalizing those demands.” Likeability is the British spelling. Alicia Menendez is American, as is her publisher (Harper Business); it’s unclear why they chose this spelling.

OK boomer. The phrase, used by people under 35 (or so) to mock or disparage their elders (whether or not they are technically part of the post-WW2 baby boom), first appeared on Reddit in 2009, but it spread into widespread use this year thanks to some popular TikTok videos. In a November blog post, Baltimore Sun editor (and boomer) John McIntyre addressed the phrase’s lack of punctuation; in the New York Times, Tracy Lorenz summed up the message: “‘Ok boomer’ has become Generation Z’s endlessly repeated retort to the problem of older people who just don’t get it, a rallying cry for millions of fed up kids. Teenagers use it to reply to cringey YouTube videos, Donald Trump tweets, and basically any person over 30 who says something condescending about young people — and the issues that matter to them.” 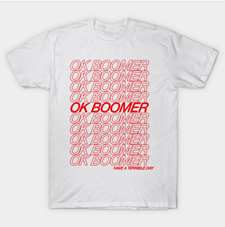 “OK boomer have a terrible day.” Via Teepublic

Opioid. In January, the National Institute on Drug Abuse reported that more than 130 Americans were dying every day because of overdoses of fentanyl, oxycodone, and other opioids—synthetic drugs that mimic the effects of natural opiates. Much of the blame has been laid on drug manufacturers that pushed their sales reps to “sell baby sell.” In September, one of the largest opioid manufacturers, Purdue Pharma, filed for bankruptcy as part of an agreement to settle more than 2,800 lawsuits. This month the New York Times reported that members of the family that owns Purdue withdrew more than $10 billion from the company over the last dozen years—at the height of the opioid crisis—and stashed it in trusts and overseas holding companies.

Quantum supremacy. A Very Big Deal in the world of supercomputing. In October, Google announced that it had achieved quantum supremacy when one of its computers solved a particularly difficult problem in 200 seconds. As Recode put it, quantum supremacy is “when a quantum computer — one that runs on the laws of quantum physics as opposed to the classical computers we’re familiar with (i.e. phones and laptops), which run on classical physics like Newton’s laws of motion — does something that no conventional computer could do in a reasonable amount of time.” Google was touting its superiority over IBM, but it turned out that IBM was no slouch in the QS department either.

Secondhand. Resellers of clothing, shoes, and home furnishings are thriving: one report estimates that the used-clothing market will double to $51 billion by 2023. As I wrote in early December, the once-stigmatized word secondhand is now a badge of pride.

Squad. The self-dubbed nickname of four left-leaning first-term Congressional representatives: Alexandria Ocasio-Cortez, Ilhan Omar, Ayanna Presley, and Rashida Tlaib. As Ben Zimmer wrote in his Wall Street Journal Word on the Street column, this usage of squad has roots in rap culture, where it “refers to one’s ‘posse’ or close circle of friends.” 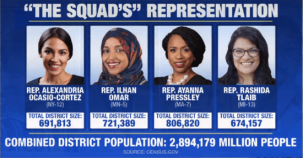 Hashtag/portmanteau of the year: #IMPOTUS, which elegantly and aptly combines impeachment and POTUS while suggesting impotent.

You okay, @realDonaldTrump? You seem to be unraveling. #IMPOTUS https://t.co/xa4L8rlD0b

Neologism of the year: Workism.

Euphemism of the year: Dark makeup. Honorable mention, with a hat tip to Mark Peters: self-partnered .

Posted at 05:00 AM in Current Affairs, Euphemisms, Politics, Portmanteaus, Science, Twitter, Word of the Year | Permalink