Word of the week: Tinsel

“Is Tinsel Canceled?” asks a headline in the December 19 New York Times Style section. The verdict: “Glitter, tinsel and shiny wrapping paper are now signs of the apocalypse, judging by the #zerowasteholidays and similar hashtags that are blooming on Instagram.”

That may be an overstatement: Tinsel tours and tinsel trails still thrive in various US municipalities, and mirror-bright strips adorn plenty of wreaths and trees. So let’s table the eco-arguments aside and get to the question at hand: What is this stuff called tinsel, and where does that word come from? If you’d asked me a few weeks ago, I’d have guessed that tinsel was related to tin, and that the decorative material was originally made from that cheap, shiny metal. Or I might have whimsically conjectured a Yiddish origin: To my ear, tinsel sounds like gunsel, a word whose sense of “young hoodlum,” the Online Etymology Dictionary tells us, “seems to be entirely traceable to Dashiell Hammett, who sneaked it into The Maltese Falcon (1929) while warring with his editor over the book’s racy language.” (The Yiddish word genzel means “young goose”; it was adopted into hobo slang as a term meaning “a young male kept as a sexual companion, especially by an older tramp.”)

I was wrong on both counts, of course.

Tinsel comes from Middle French estincelle, which meant “spark” or “spangle,” and is related to stencil. In English, it has meant “very thin sheets or strips of shiny metal” for more than 400 years, and has had a figurative sense of “anything showy with little real worth” for almost that long.

From a Wikipedia entry:

Modern tinsel was invented in Nuremberg around 1610. Tinsel was originally made from extruded strands of silver. Because silver tarnishes quickly, other shiny metals were substituted. Before the 19th century, tinsel was used for adorning sculptures rather than Christmas trees. It was added to Christmas trees to enhance the flickering of the candles on the tree.

By the early 20th century, most tinsel was made from aluminum. Today it’s usually made from polyvinyl chloride (PVC), which means it’s practically indestructible. (Also indigestible. Keep it away from cats, dogs, and babies.)

Strictly speaking, it’s tinsel only if the sparkly material is attached to a thread, as in a garland. 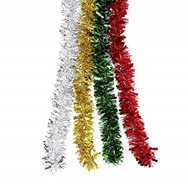 When it’s individual strips resembling angel hair or icicles, the proper name is lametta, an Italian word meaning “small metal plate.” Lametta is related to laminate and to the shiny fabric known in English as lamé (la-MAY), which in the original French is an adjective meaning metallic. (The French word for that shiny fabric is lame—no accent—which is pronounced LAHM.) 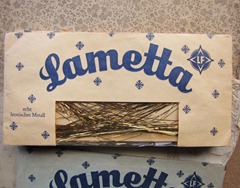 German lametta from the 1980s, made from pressed brass. Via Etay.

I was surprised to learn, while researching this post, that “Tinseltown,” a nickname for Hollywood and by extension the motion-picture industry, is quite recent: The OED’s earliest citation is from 1975, in the British publication The Bookseller. (The Online Etymology gives a slightly earlier date, 1972, but no citation.) I’d have guessed that it dated from the 1920s.

Tinseltown USA is a chain of movie theaters owned and operated by Cinemark since 1996. There are currently 29 Tinseltown USA locations, none of them in California, maybe because we have our own genuine Tinseltown in Los Angeles County. 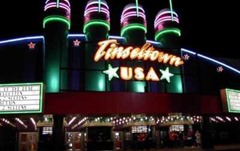 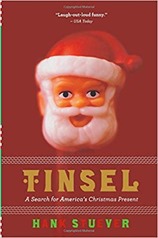 For one chapter of Tinsel, Stuever accompanies Christmas-decorator-for-hire Tammie Parnell to First Monday, a vast, five-day Christmas-décor marketplace outside Plano. It’s in the country, Stuever writes, but also “in what I call the kountry, an in-between place that thrives on repurposing old-fashioned America for new-fashioned America.” He spotted some so-bad-they’re-good business names:

Have a razzl dazzl holiday, with or without tinsel. I’ll  be back at the end of the week.

Posted at 05:00 AM in Books, French, Holidays, Word of the Week | Permalink

Strip away the phony tinsel of Hollywood and you will find the real tinsel underneath.
[Oscar Levant] As quoted in Jewish Wit (1962) by Theodor Reik, p. 104, also in Inquisition in Eden (1965) and Whatever It Is, I’m Against It (1984) by Nat Shapiro

Thanks, John! Love that quote.