Word of the week: Secondhand

There was a time, not so long ago, when brands avoided the word secondhand, with its overtones of “second class” and its toxic whiff of “secondhand smoke.” If they had to broach the subject of non-newness, they used tech-sounding words like upcycling—Cambridge Dictionary’s word of the year for 2019—or coy circumlocutions like nearly new. Or they opted, as Stan Carey noted in a 2011 blog post, for euphemisms like preloved or even experienced—as in “experienced cars,” the winner of William Safire’s 1979 Language Prettification and Avoidance of Ugly Reality Award.

Lately, though, plain-spoken secondhand (sometimes spelled second-hand) has been reclaimed with something like pride. “As the secondhand apparel market booms, used clothing is becoming an acceptable holiday gift,” reads a November 27, 2019, headline on CNBC.com. In the UK, the Oxfam charity promoted #secondhandseptember. In the US, the giant online reseller thredUP—whose tagline is “Secondhand clothes. Firsthand fun”—is behind the catchy hashtag #secondhandfirst. (More than 170,000 Instagram posts use that hashtag.) In August, thredUP announced partnerships with JCPenney and Macy’s to sell secondhand fashion in the department stores.

Secondhand is even the title of a new book by Adam Minter with the subtitle “Travels in the New Global Garage Sale.” (Listen to or read a Fresh Air interview with Minter here.) 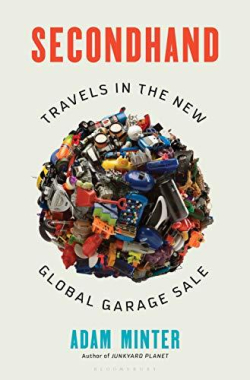 We’ve had secondhand in English for more than five centuries. Its original usage, from the mid-1400s, was in the phrase at second hand, which meant to buy or receive from some party other than the original source. (Firsthand began appearing around the same time; the hand here was literal: “the hand of the maker.”) The sense of “not new” is a couple of centuries more recent. Secondhand smoke is surprisingly old: The OED has an 1894 citation from the Cambridge City, Indiana, Tribune. The sense was neutral or positive back then: “Secondhand smoke. ... It wasn’t long before Ira declared that he got just as much enjoyment from his smoke at secondhand.”

You’ve probably heard Barbra Streisand’s version of “Second Hand Rose,” from Funny Girl (1968). But I’m partial to the 1921 original, sung by Fanny Brice in her inimitable NewYawkYiddish accent. And ooh-la-la, that photo!

Hand appears in many compound English words, sometimes in the literal sense and sometimes metaphorically, as a stand-in for power or mastery. To have the upper hand (earliest citation: 1481) is to have control or an advantage. To be underhanded (1538) is to behave in a secret or stealthy way. Offhand (1690s) originally meant “at once”; the hand in question may have been the shooting hand, employed without a support. The meaning evolved over the next couple of decades into our current one: “without deliberation.” In beforehand (early 13th century), the hand is “of uncertain signification, unless the original notion is payment in advance or something done before another’s hand does it,” says the Online Etymology Dictionary. Why, you may wonder, don’t we say afterhand? I have no idea.

Posted at 09:07 AM in Books, Euphemisms, Retail, Word of the Week | Permalink