« Brands of the year: Fritinancy edition | Main | Word of the week: Tinsel »

Personal name: AOC. “Alexandria Ocasio-Cortez” is a mouthful, and a lot of characters to cram into a headline. And so the first-term US representative from New York—who has made waves with her proposal for a Green New Deal and her sharp social-media barbs—is known by her monogram. (It’s even her Twitter handle.) We’ve had three-letter-monogrammed male politicians in the past, notably FDR, JFK, and LBJ, but monogrammed women are rare in politics and elsewhere.  Of course, we shouldn’t overlook the influence of that octogenarian trendsetter Notorious RBG.

Cleveland.com, December 19, 2019. No, I don’t know why this story is categorized as “entertainment” instead of “politics.”

Place name:  Ukraine. President Trump thought his July 25 telephone call with Ukrainian President Volodymyr Zelenskiy was “perfect,” but the Democratic majority in the US House of Representatives thought otherwise. On December 18, the House voted to impeach the 45th president on charges that he abused his office and obstructed Congress. Ukraine was at the center of the vote: According to the whistleblower complaint that triggered the impeachment hearings, Trump attempt to coerce Zelenskiy—like the US president, a former TV personality—to investigate Democratic presidential candidate Joe Biden and his son, Hunter. As a result, Americans who still thought the country was called “the Ukraine”—it dropped the article after independence in 1991—had to learn in a hurry about the country’s capital (Kyiv or Kiev?), history, and politics.

Runner-up: Arrokoth. The distant Kuyper belt body—a billion miles beyond Pluto—went through multiple designations after its initial discovery in 2014 and was finally dubbed “minor planet 486958.” Before the New Horizons probe flew over it on January 1, 2019, NASA received about 34,000 name suggestions. The final selection, Ultima Thule (literally “farthest Thule,” Thule being the farthest north location mentioned in ancient Greek and Roman literature and cartography). didn’t stick: It turns out that Ultima Thule is used by Nazi occultists as the mythical home of the “Aryan race.” In November, NASA announced the replacement name, Arrokoth, which means “sky” in the Powhatan/Algonquian language.

Fictional name: Baby Yoda. In the new Star Wars series “The Mandalorian,” which premiered on the Disney Plus channel in November, the recurring character with the saucer eyes and batlike ears is known simply and quasi-religiously—as New York Times TV critic James Poniewozik points out--as The Child. “He may or may not be a baby,” writes Poniewozik, but that didn’t stop viewers and critics, perhaps under the lingering influence of Baby Shark, from dubbing him (it?) Baby Yoda. Interesting footnote: No one know for sure the origin of the “Yoda” name, but according to one theory it’s a shortening of yodea, a Hebrew word that means “he/she/it knows.” 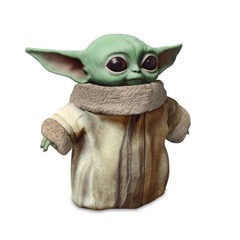 Trade name: TikTok. The app for making and sharing short videos — “content powered by AI technology — launched internationally in September 2017 and now reportedly has more than 500 million users. It’s the first Chinese-made app to succeed on a mass scale outside China. The TikTok name, which appears only outside China, apparently is — according to Dictionary.com — "a play on tick-tock, onomatopoeia for clocks and a term for countdowns and minute-by-minute action." In China, it's known as Dǒuyīn (抖音), which translates to "vibrato" or "trill." (My thanks to Victor Mair, professor of Chinese at the University of Pennsylvania, for translation assistance.)

Local name: Conception. In September, a fire aboard the dive boat Conception led to the worst maritime disaster in California in more than 150 years. The vessel sank in waters off California’s Channel Islands, and 33 passengers and one crew member died. As with two of my previous local names of the year, Journey’s End and Ghost Ship, “Conception” is, in retrospect, bitterly ironic.

Posted at 05:00 AM in Name of the Year, Politics, Retrospective, Science | Permalink