writer: what's the word i want here, is it trademarks? or patents?
editor: yeah, i think it's both. just put both, can't go wrong. it's called the patent AND trademark office after all.
writer: you're so wise pic.twitter.com/NCojJAR5ze

From “reformed journalist” Tom Whitwell, “52 Things I Learned in 2019.” Here’s #12: “Drug names are changing: X and Z names (Prozac, Seroxat) are giving way to names ending in O or A (Natesto, Qsymia) which are more appealing to speakers of Romance languages in Europe and South America.”

A guide to the lingo of sustainable fashion, from “conscious” and “ethical” to “cruelty free” and “fair trade.”

Why do we say (ad nauseam) “’Tis the season”? And what’s a ’tis, anyway? Merriam-Webster patiently explains. (h/t Emily Brewster) 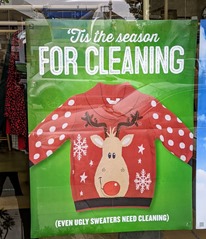 James Harbeck almost broke Twitter when he asked his followers to nominate words they love “irrationally much.” He compiled the results on his blog, Sesquiotica, and included one of my own favorites, petrichor.

Alas, Drew Magary no longer writes for Deadspin—he was among the writers and editors who exited that publication en masse in late October—but be of good cheer: His gleefully mordant Haters Guide to the Williams-Sonoma Catalog lives on in its new home on Vice. Mr. Magary does not spare the bile, or the profanity, but let’s be frank—when you’re considering with a pair of “Star Wars BB8 Ice Molds” ($21.95) or the “Jura Z8 Fully Automatic Espresso Machine” ($4,399.95), an F-bomb or three does not seem inappropriate in the slightest.