Early in The Poison Squad, Blum sketches the appalling and often lethal history of food adulteration, which is far from a modern invention:

In thirteenth-century England, there were tradespeople called garblers (from an old Arabic word for sieve), hired to inspect imported spices and sift out grain and grit. Predictably, some garblers, those in the employ of unscrupulous importers or merchants, did just the opposite, mixing ground twigs and sand into the spices themselves. Eventually the word “garble” came to mean mixing things up incorrectly. 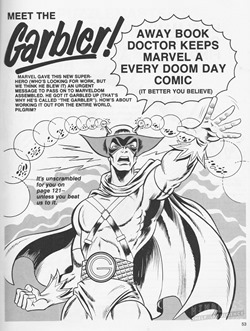 The Garbler, a character in the Marvel Fun Book series (1976-1979). “Among the more unusual villains [in the series] were characters like The Garbler and the Vowel Snatcher, who don’t exist anywhere in Marvel Comics except this Fun Book. Which, honestly, is a pretty good thing… but with later characters like Typeface and Spellcheck (not kidding), these guys were way ahead of their time.” – Mindless Shelf Indulgence, September 17, 2019

It’s true that an Arabic word, gharbala (also spelled karbala), translates to “sift,” or “select,” and is related to ghirbāl or kirbāl, meaning “sieve.” Italian borrowed gharbala and turned it into the verb garballare, which found its way into English in the late 15th century. (Other Romance languages had similar words.) But the OED is skeptical that gharbala is actually Arabic in origin:

The twofold form of the Arabic words shows that they are not of native formation; a probable source has been found in the late Latin crībellare, < crībellum diminutive of crībrum sieve.

Garble developed from Late Latin cribellare, a verb meaning “to sift.” Arabic speakers borrowed “cribellare” as “gharbala,” and the Arabic word passed into Old Italian as garbellare; both of these words also meant “to sift.” When the word first entered Middle English as “garbelen,” its meaning stayed close to the original; it meant “to sort out the best.” But that sort of sifting can cause a distortion, and in early Modern English “garble” came to mean “to distort the meaning or sound of.”

I wanted garble to be related to garbage, but no: garbage is “of obscure origin,” and first appears in Anglo-French as sergant garbagere, a kitchen servant tasked with plucking and cleaning poultry.

It would also be satisfying to tell you the garble is related to gobble, which can mean “the sound a turkey makes” or “to eat greedily,” both of which are relevant this Thanksgiving week. Again: alas, no. The first gobble is “probably imitative”*; the second comes from gob, which is Irish for “mouth.” Gob is also the source for gobsmacked—flabbergasted, amazed, astounded; literally “smacked in the mouth”—which is what all this new information has left me.

Posted at 05:00 AM in Arabic, Books, Etymology, Latin, Word of the Week | Permalink