Determined drinkers in the 1920s often resorted to concocting their own beverages, perhaps as bathtub gin, a term that first appeared in 1920 and covered any type of amateur homemade spirit. If you favored something less potent, you could make your own beer using supplies sold legally at a malt shop. During Prohibition the Pabst brewery, famous then as now for its Blue Ribbon beer, sold Pabst Blue Label malt syrup: Just add yeast, water, and time. The term for the activity and its outcome was homebrew, which had entered the lexicon in the early 19th century but spiked dramatically in usage beginning in 1920. A quarter-century later, the meaning of homebrew would be extended to signify homemade or improvised electronic equipment. In the 1970s, homebrew computing clubs sprang up; the most famous was the Homebrew Computer Club of Menlo Park, California, whose members included Apple co-founder Steve Wozniak and other influential computing pioneers. 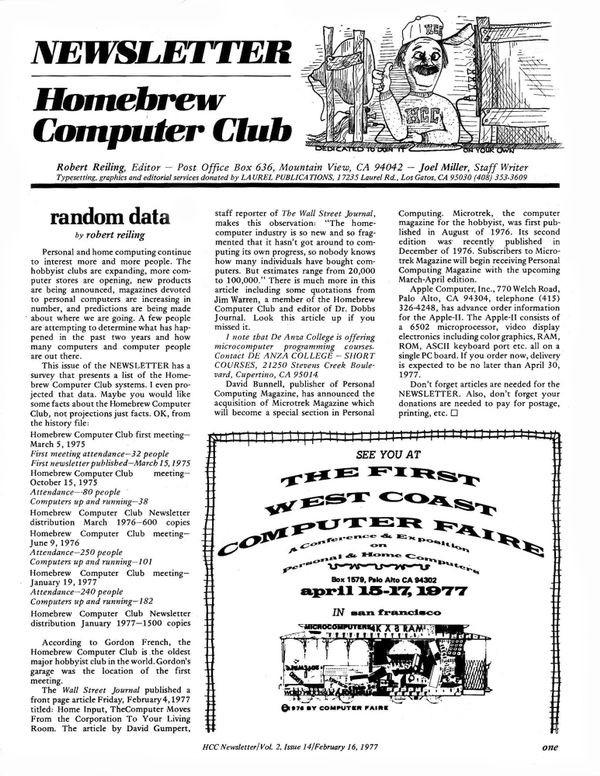 A 1977 issue of the Homebrew Computer Club newsletter.

Whether the booze was imported or homebrewed, a lot of people were indulging to excess, which inspired a spate of inventive new slang terms for “drunk.” In 1927, the writer Edmund Wilson, whose loftier credits included a stint as the New Yorker’s chief book critic, compiled a “Lexicon of Prohibition” that consisted of 104 synonyms for “intoxicated” that he arranged “as far as possible, in order of the degrees of intensity of the conditions which they represent.” On the mild end of the spectrum were lit, squiffy, oiled, lubricated, and owled; at the other extremity were to have the heeby-jeebies, to have the screaming-meemies, and to burn with a low blue flame.

Blog bonus! I limited my Visual Thesaurus investigation to booze and drinking, but that wasn’t the only field of linguistic innovation in the 1920s. In the morals-loosening aftermath of World War I, sex emerged from the discreet shadows and became, well, a hot topic. One of the words that marked the era was it, a synonym for sex appeal (or, more generally, “an alluring or magnetic personal quality”).* The first writer to use it in this way was Rudyard Kipling, who explained it thus in his 1904 collection of poems and short stories Traffics & Discoveries: “Tisn’t beauty, so to speak, nor good talk necessarily. It’s just It. Some women’ll stay in a man’s memory if they once walk down a street.”

But it took the British novelist Elinor Glyn to make it a household word. Glyn used It as the title of her scandalous 1927 novel, published when the author was 53, and attached it to a male character—“He had that nameless charm, with a strong magnetism which can only be called ‘It.’” The film adaptation, released the same year, forever linked it to 22-year-old star Clara Bow—and by extension to women generally. 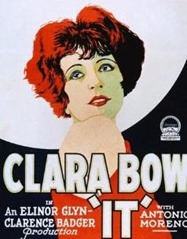 Glyn’s older sister Lucy is said to have been the first “It Girl.” A fashion designer known professionally as Lucile, “she was famous for making sexuality an aspect of fashion through her provocative lingerie and lingerie-inspired clothes,” according to a Wikipedia entry. Since the 1990s, an It Girl has been “a wealthy, normally unemployed, young woman who is pictured in tabloids going to many parties often in the company of other celebrities.”

It switched from male to female, but the opposite sex reversal occurred with gigolo, “a professional male escort or dancing partner” or “young man supported financially by an older woman in exchange for his attentions.” The word first appeared in (English-language) print in a short story by Edna Ferber, “Gigolo,” published in the November 1922 issue of the American monthly Women’s Home Companion. The story begins with a definition:

In the first place, gigolo is slang. In the second place (with no desire to appear patronizing, but one's French conversation class does not include the argot), it is French slang. In the third place, the gig is pronounced zhig, and the whole is not a respectable word. Finally, it is a term of utter contempt.

A gigolo, generally speaking, is a man who lives off women’s money. In the mad year 1922 … a gigolo, definitely speaking, designated one of those incredible and pathetic male creatures, born of the war, who, for ten francs or more or even less, would dance with any woman wishing to dance on the crowded floors of public tea rooms, dinner or supper rooms in the cafés, hotels, and restaurants of France.

The French word was formed as the masculine version of gigole, “a tall, thin woman; a dancing girl; a prostitute.” It comes, “perhaps” (according to the OED), from the verb gigoter, “to move the shanks, to hop”—as in doing a jig, 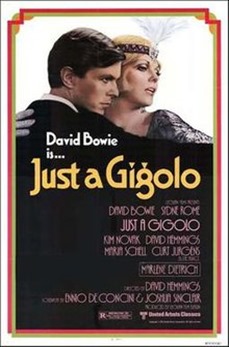 Gigolo probably owes its spread to a 1927 German song, “Schöner Gigolo, armer Gigolo,” which was translated into English in 1928 as “Just a Gigolo.” The 1978 film Just a Gigolo is based on the original lyrics and is widely regarded as a turkey—“an inferior or unsuccessful cinematographic or theatrical production.” That slang sense of turkey is another legacy of the Prohibition era: It first appeared in print in a 1927 issue of Vanity Fair, which put the word between quotation marks and defined it as “a third rate production.” “The logic behind ‘turkey’ in this sense is a bit mysterious,” notes The Word Detective, “but it may have been a reference to the inept attempts at flight of a domesticated turkey.”

Listen to Louis Prima’s version of “Just a Gigolo” and “I Ain’t Got Nobody.”

P.S. A reminder that my Visual Thesaurus columns are unpaywalled after three months on the site. So you freeloaders can now read my review of Gretchen McCullough’s Because Internet, my dive into deep, my spin around the lingo of e-scooters (from micro-mobility to geo-speed limiting and beyond), and much more.

* Six decades later, Stephen King turned it into the titular name of a monster.