Maybe that book of yours will become an audiobook. Here’s editor and author Carol Saller with tips on preparing an audiobook for a narrator who isn’t you.

Just in >> House and Senate Dems just introduced the “THUG Act” which would block funding for the G7 at Doral. pic.twitter.com/ol1G85ZrLX

Hat tip: Rochelle Kopp. For other legislative backronyms—including PATRIOT, DREAM, and MAR-A-LAGO—see my September 2017 column for the Visual Thesaurus.

Bland, versatile Helvetica is the most popular typeface in history. Badly spaced Hellvetica, on the other hand, is guaranteed to be every designer’s least favorite option. Designed by creative directors Zack Rolf and Matthew Woodward, Hellvetica is “a typeface for sending your designs straight to Hades,” writes Arielle Pardes in Wired: “The words look right, until they don’t. Letters run into one another as if pressed together in a crowded subway car. Staring at a sentence in Hellvetica is dizzying and disorienting, as if trying to read while drunk.” 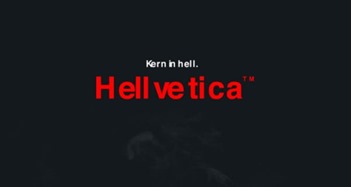 What to call the latest Ukrainian-accented Washington scandal? Mark Liberman opens the discussion on Language Log, and commenters offer some excellent suggestions. I’m torn between “ClusterTrump” and “Stupid Watergate.”

Speaking of scandalous, and of acronyms, a new bakery in San Francisco is called FYUB. Owner Nora Haron told the San Francisco Chronicle that the name came was inspired by a vegan avocado scone her assistant made. “It was so good, it f—ed me up!”

On the Namerology blog, Laura Wattenberg reports that Americans are naming their infant sons Shooter, Slayer, Trooper, and Tripper.

These are the reindeer on the MAGA sleigh https://t.co/fylnQU1Jc3

I can't wait to share this article with my kids, Trapper Keeper and Quicker Picker Upper.

A Wikipedia glossary of professional wrestling terms. As Language Log points out, many of the terms are useful in understanding how the current occupant of the White House perceives the world. Related: my post from 2016 on kayfabe.

A Hundred Monkeys explains why renaming is “like naming, but harder.”

The founders wanted Rent.com, but didn’t want to pay $40,000 for the domain.  How Netflix got its name.

The logo of the 2024 Summer Olympics, which will take place in Paris, was revealed last week, and it’s très chic, naturellement. According to the International Olympic Committee press release, “The new design brings together three iconic symbols connected to sport, the Games and France – the gold medal, the Olympic and Paralympic flames, and Marianne”—the personification of France since the Revolution. The Brand New design blog says “having a woman be the emblem of the Summer Olympics is such a bold move. Heck, having a man be the emblem of the Olympics would have been bold too, given that most emblems have been abstract or genderless figures when depicting humans. But this is especially striking.” So striking, in fact, that Megan Clement, a freelance journalist in Paris, was moved to invent a Twitter story about la femme Olympique. 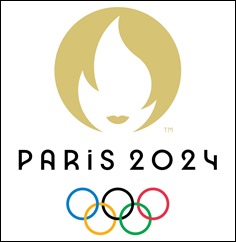 Posted at 05:00 AM in Acronyms, Baby Names, Books, Design, How They Got That Name, Linkfest, Naming, Politics, Profanity, Renaming, Sports, Typeface | Permalink