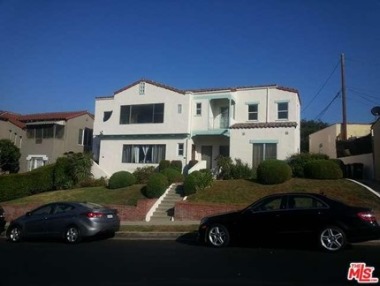 I have discovered that there are myriad words for a three-unit building, several interpretations of triplex, and two legitimate pronunciations that almost never overlap and which seem to follow a regional map.

I was moved to look into triplex because of what I assumed was a pronunciation error in an audiobook I’ve been enjoying: George Packer’s recently published Our Man: Richard Holbrooke and the End of the American Century, about the complicated and often undiplomatic diplomat who negotiated a resolution to the Balkan conflict in 1995. The book’s narration, by Joe Barrett, is generally excellent, but on two occasions when Barrett refers to property owned by Holbrooke as a triplex, he pronounces the word TRIP-lex.

OK, I thought. Maybe he’s never encountered the word before. A forgivable error!*

But then I thought about it. That Holbrooke triplex in New York City sounded like a high-rise apartment, not my Spanish-bungalow fantasy. Is this perhaps a different species of real estate altogether?

I turned to Twitter. And what I discovered made me feel less than triumphant (a word that has nothing to do with three but probably comes from Greek thriambos, “hymn to Dionysus”).

How do you pronounce "triplex," and where are you from?

The sample is small, and people move around a lot, but I deduced that TRY-plex skews West Coast, and especially Southern California. It’s also preferred by some respondents from Salt Lake City, Tucson, Seattle, and Toronto, although I also heard from a mixed marriage in Toronto: he says TRIP-lex, she says TRY-plex.

I confirmed my findings by looking up sales videos for triplexes around North America. It’s TRY- not only in L.A. but also in Phoenix, San Diego, Portland (Oregon), Sacramento, and, yes, a chilly-looking Toronto.

And also in the Bay Area, if this news report is to be trusted.

One San Francisco respondent acknowledged that he could see “how having ‘trip’ and ‘triple’ in there might tempt someone to pronounce it that way, but that’s not how the word breaks up, so it would never have occurred to me to do that.” And another San Francisco respondent insisted that the correct term is “three-flat,” which also came up in a response from Chicago.

Bostonians say TRIP-lex when they aren’t saying “three-decker,” which to me has always and only signified a tall sandwich. According to a scholarly paper published by an MIT professor in 2006, the three-decker “is distinctive in two ways: its physical form, which is moderately dense and yet modest in scale; and its tenancy structure, which typically involves one household owning the entire building, while residing in one apartment and renting out the other two.” 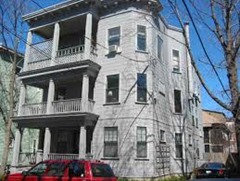 It gives me no pleasure to inform you that three standard dictionaries—American Heritage, Merriam-Webster, and the online OED—give TRIP-lex as the preferred pronunciation, although TRY-plex is also noted. The short-i pronunciation of triplex is preferred in New York and some other parts of North America, including Minneapolis, Vancouver, and Philadelphia, according to my small and unscientific survey.

I was even more surprised to find that the OED’s oldest citation for residential “triplex” refers not to a three-unit building but to a single three-level apartment in a large multi-unit building. (Edna Ferber in Cosmopolitan, March 18, 1932: “Photographs in the magazines showed her glamorous apartment—triplex, with balcony overhanging the East River.” See also: “Trump triplex.”) The earliest citation for the other kind of triplex—a three-unit building—is in a 1962 issue of the Canadian magazine Maclean’s. However, if someone were to put me on a modest retainer, I’m willing to bet I could antedate that latter citation in, say, a back number of the Los Angeles Times.

In any event. the OED says the first usage is “chiefly US” and the second is “chiefly North American.” 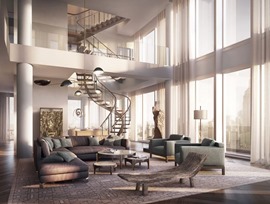 Interior of a Manhattan triplex bought by Rupert Murdoch in 2014. He also bought a separate three-bedroom apartment on the floor below. #wretchedexcess

Some Americans say TRY-plex when it’s a three-screen movie theater and TRIP-lex when it’s residential property. You humans baffle and amuse me.

“I don't think I've ever come across that word before,” wrote a respondent in Western Canada. The few people in the UK and Europe who responded were similarly puzzled.

Other uses of triplex

A lawn mower. Triplex lawn mowers have three reels and are often used on golf courses.

A subway car. The D-type Triplex car, used in the New York subway system between 1925 and 1965, consisted of three articulated units.

A type of three-ply cardboard. It appears to be made mostly in China these days.

A type of toughened glass consisting of a layer of celluloid sandwiched between two layers of glass. A British trademark dating back to the early 1920s.

Genetics. “Having the dominant allele of any particular gene represented three times.” The OED has a 1921 citation for this usage of triplex, in reference to a poinsettia plant.

* As opposed to an unforgivable error I once caught, when a audiobook narrator mispronounced the name of the book’s author.

Posted at 05:06 AM in Pronunciation, Real Estate, Word of the Week | Permalink

I think my duck leaks. Sort of like my duplex.

Pronouncing it with a trip (as in speak the speech trippingly ) implies other meanings
A good friend of extraordinary corpulence asks that i look for triplex T-shirts as vacation souvenirs..she does not want triplex-rated ones lest her grandchildren might see them

Susan Yerkes: There's a big difference between triple-X and trip-lex.