I took a quick trip across the state line, via the California Zephyr, to see the excellent “Georgia O’Keeffe: Living Modern” at the Nevada Museum of Art. (It’s the only museum in the Western US to host this touring show, which originated at the Brooklyn Museum.)

I didn’t take any pictures of the exhibit, which presents O’Keeffe’s paintings alongside photographs of her by Alfred Stieglitz, Bruce Weber, and others. Because really: my photos? Not worthy.

Also on display is a selection O’Keeffe’s clothes, most of them in the stark black and white she favored, and many of them made by hand by the artist herself. I’m an O’Keeffe fan, but somehow had not known that she was an expert seamstress. 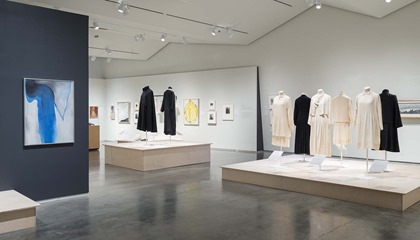 And here’s a photo from the Brooklyn Museum of a linen blouse O’Keeffe made for herself. It’s shaped by dozens of tiny pintucks, all sewn by hand. 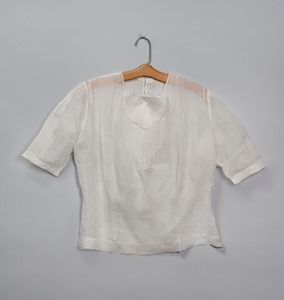 And that bow at the neck!

If you know anything about Reno, you probably know that the city’s name was once synonymous with “quickie divorce.” 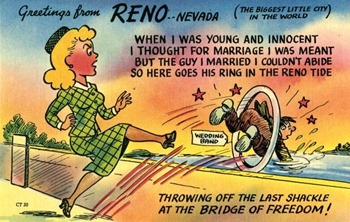 And maybe you know about the famous Reno arch with the famous Reno slogan: “The biggest little city in the world.” The inventor of that slogan won $100 in a 1929 contest, but by then the arch was already a fixture on Virginia Street. It was originally erected to commemorate the completion in 1926 of the Lincoln and Victory transcontinental highways (now supplanted by Interstate 80 and Interstate 50, respectively).

There are two downtown “biggest little city” arches. This one spans Lake Street. (There’s no lake there; the street is named after Myron Lake, a mid-19th-century real estate developer.) 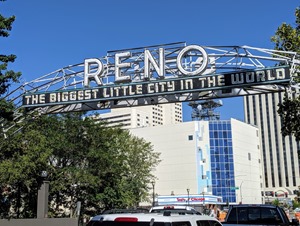 There’s a plaque nearby explaining the convoluted history of the arch(es). 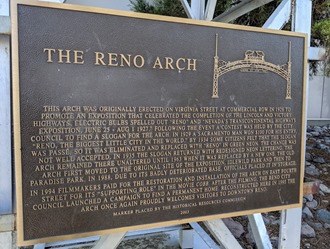 The city of Reno (founded in 1868, the year the transcontinental railroad reached the town) is named for a Union major general, Jesse Reno, whose ancestors Anglicized their name from Renault. Jesse Reno was born in Wheeling, in present-day West Virginia, and grew up in Pennsylvania. He never saw Nevada.

Here’s the other arch, in the original location spanning Virginia Street at Commercial Row. I have not been able to find an explanation for the duplication. 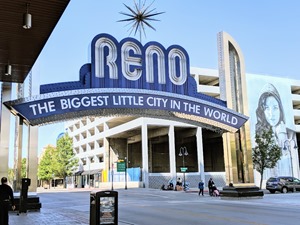 A city so nice, they arched it twice.

There’s lots of gambling in Reno, obviously, but I stayed in the one downtown hotel with no casino. It’s 100% nonsmoking, too. It caters to a sportif crowd drawn to the area’s outdoor attractions (rafting, climbing, trail running, bicycling). For show-offs, the hotel’s façade features a climbing wall. 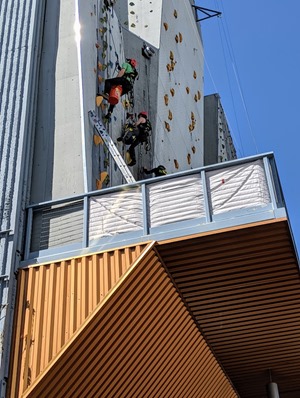 There’s a huge indoor climbing gym as well. Tempting, but I passed. I’m more of an aquatic mammal, anyway.

The National Automobile Museum, a short walk from my downtown digs, is spectacular, even if you’re not a car buff (and I am not). It consists largely of the collection of William F. (Bill) Harrah (1911–1978), who pretty much singlehandedly built the Reno gambling industry from one lone bingo parlor, and whose name is now on hotels and casinos all over Nevada. 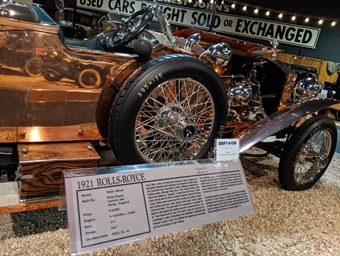 Copper-plated 1921 Rolls-Royce. A German tourist stood in front of it, gaping reverently, for a solid 10 minutes.

For a sign-reader like me, this museum is nirvana. 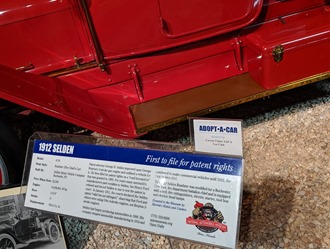 “First to file for patent rights”

A clever and beautiful example of signage from Carter Carbureter (sic). 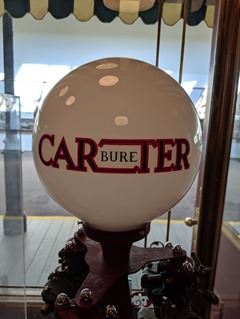 There’s even a Burma-Shave sign display (impossible to photograph), which I struggled to explain to the German tourist. I think I failed.

You want kitsch? Reno’s got it. 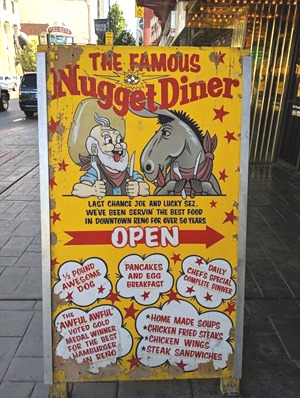 The famous Nugget Diner on Virginia Street. In addition to burgers like the Awful Awful—so named because it’s “awful big and awful good!”—it sells the Sicilian Submarine Fried Calamari Sandwich, “a sandwich you can’t refuse!”

Also: So. Many. Pawn shops. This was my favorite one, because of the faux-classical decor and that gender-inclusive sign. 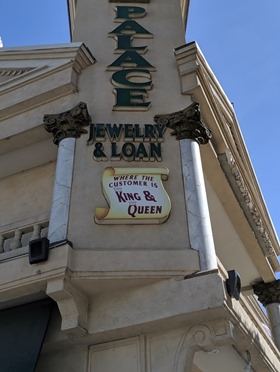 “Where the customer is king & queen”

I love a good ghost sign, especially juxtaposed against something new and cheesy. 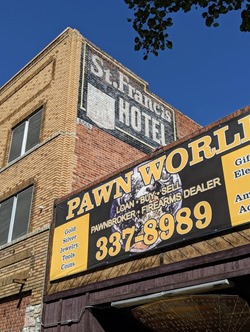 A perfect little getaway. I enthusiastically recommend the Amtrak experience, which was scenic and right on schedule. I especially enjoyed the docents from the California State Railroad Museum who narrated the spectacular segment over the Sierra Nevada.

(Wondering about the approved pronunciation of “Nevada”? Here you go.)

Thanks to Johnny Cash and “Folsom Prison Blues” for title inspiration. For the record, I did not eat in a fancy dinin’ car.

Posted at 05:00 AM in Art, Naming, Signs, Slogans and Taglines, Travel | Permalink

makes me want to go asap. Love the images!

Memories. We eloped to Reno in 1999 since Ken was gonna pick up an old MG in nearby Dixon. (Twofer.) We stayed at Harrahs where they fussed over us. Fussed over again at the pawn shop where Ken bought his ring; plus coupon for discounted ceremony at the Heart of Reno wedding chapel. We crossed the rubble where the town was being razed to the courthouse where the clerk fussed over us. We exchanged short vows in the fake-wood-panel office of the former car-fix-it garage. Our minister had pumpkin colored hair and wore a shocking pink velour running outfit. Instead of fussing over us, she had a magic wand that morphed that ugly room into Cinderella's coach. More coupons for meals, the girlie show at Harrahs, a native American poem about marriage. We made our way back across the Truckee River on the new bridge and sat under a tree to read the lovely poem. When we returned last summer for the first night of a long car trip, our wedding chapel was razed to make way for the new spiffy town that we barely recognized. The museum is a little jewel box. So glad you snapped photos.