« Pretty big little tiny lying things | Main | On the Visual Thesaurus: The character of our content »

I was curious to see whether anyone else was using “farmageddon,” capitalized or not, in reference to the dismal state of agriculture in the U.S. Sure enough, here’s Zero Hedge, a financial/political blog with multiple pseudonymous contributors (and a manifesto).

A linked story, from early June, spells it out in detail:

Farm bankruptcies have already risen to the highest level in 7 years, but many expect that they will soon surge to all-time record highs.  Due to the incredibly wet weather, millions upon millions of acres of prime U.S. farmland will not be planted with crops at all this year.  And millions of acres that do get planted will yield a lot less than usual because of the wretched conditions.  Meanwhile, the U.S. will export far less corn and soybeans than usual this year due to our trade conflicts with China and Mexico.  With much less international demand, U.S. farmers are going to have an increasingly difficult time trying to make a profit on anything they are able to grow.

In the end, thousands of farmers will not be able to recover from this crisis and will be forced out of the industry for good

Meanwhile, across the pond, Brexit looms, and a series of books published under the “Bite-Sized Brexit” rubric attempts to make sense of what might otherwise, heaven forfend, be interpreted as clusterfuckery. The cover of the series’ fifth title, Farmageddon?, features a when-pigs-fly illustration. 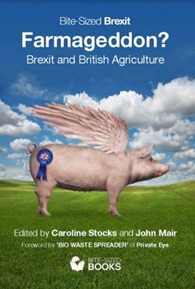 Speaking of cute livestock, I for one am looking forward to A Shaun the Sheep Movie: Farmageddon, the new stop-motion-animation film from Aardman Pictures, the team behind Shaun the Sheep and Wallace & Gromit. It opens in the U.K. in October and in the U.S. in December. Plot summary from IMDb: “When an alien with amazing powers crash-lands near Mossy Bottom Farm, Shaun the Sheep goes on a mission to shepherd the intergalactic visitor home before a sinister organization can capture her.”

(Wait: Can a sheep be a shepherd?) 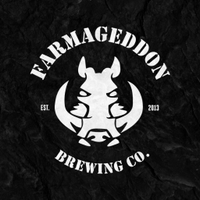 Farmageddon Brewing Co. is based in County Down, Northern Ireland. It makes a product called Kwiek, a misspelling of Norwegian kweik, the word for a particular kind of traditional yeast.

There’s a Farmageddon Brewery in the U.S. with an address in Paradise, the Northern California town that was ravaged in the 2018 Camp Fire. (Remember when the current occupant of the White House called the town “Pleasure” in front of California’s governor and lieutenant governor?) As far as I can tell, the brewery survived the fire and is still in business. 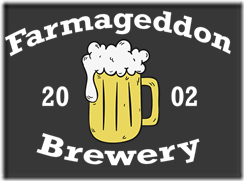