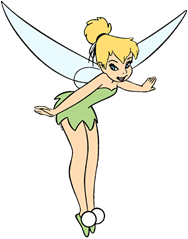 In the stage version of Peter Pan, a fairy named Tinkerbell intentionally drinks poison so as to prevent Peter Pan from drinking it. Sadly, Tinkerbell is left dying, but the audience (normally children) is then asked to demonstrate that they believe in fairies by clapping. Sure enough, they are thereby successful at restoring Tinkerbell to life. In the quantum control demonstration described above, a similar request is made with a similar illusory result. Of course, in the play, the illusory efficacy of the audience is supported by an external event performed by an actor, whereas the illusory perception of coherent directed motion (in actually random motion) is nearly entirely in the head of the beholder (in the Cartesian theatre?). Nonetheless, in both cases an illusion of control may be obtained. The question is, how does the head see coherent motion where there isn’t any?

The Tinkerbell effect has widespread manifestations that go beyond mere magical thinking. In “Ceci N’est Pas un Dollar,” an episode of WNYC’s “On the Media” that originally aired in October 2018 and was rebroadcast last week, host Bob Garfield evokes the Tinkerbell effect in a wide-ranging discussion of money. The Tinkerbell effect, Garfield says, is what allows us to assign value to printed slips of paper—whether those slips are issued by the U.S. Treasury Department or painstakingly replicated by an artist.

Beginning in the 1980s, an artist who called himself J.S.G. Boggs (1955–2017) began exchanging, and then selling, the “eerily perfect” facsimiles he’d crafted of bills of various denominations. “Lacking any intrinsic worth,” says Garfield, “a Boggs had value only if [the artist] could persuade someone to believe it’s valuable.”

You can say the same about “real” money. Or as Neha Narula, director of MIT’s Digital Currency Initiative, puts it on the “On the Media” episode: “Money is a story we tell ourselves.”

By the way, there’s also something called the Reverse Tinkerbell effect, which postulates that a phenomenon is less likely to be true as a consequence of more people believing in it. David Post, who teaches law at Temple University, coined “Reverse Tinkerbell effect” in a 2003 post on The Volokh Conspiracy. (He also claims to have invented “Tinkerbell effect,” but he was a year too late.) Post’s examples of Reverse Tinkerbell include “The more you think your vote matters, the more likely you are to vote, and the less your vote matters. If everyone thinks his/her vote doesn't matter, they'll stop voting -- in which case their votes do matter” and “The more that people think X is a quiet and unspoiled spot, good for solitude and contemplation, the less quiet and unspoiled it will become.” Some of the runner-up names for the phenomenon: “the paradox of belief,” “untruisms,” and “self-defeating prophesies,”

Posted at 06:00 AM in Books, Effect, Eponyms, Fairy tales, Finance, Radio, Word of the Week | Permalink

I had never heard about the Tinkerbell Effect until this post. But I found it to be very interesting and telling about the society that we live in. Most of our currency isn't backed by the gold it once was, but we the people give it the same value. Our once-mighty dollar is becoming more of the "Tinkerbell effect". Thanks for the great read.

Listen to the whole On the Media episode for a full explanation: https://www.wnycstudios.org/story/ceci-nest-pas-un-dollar-1