Infested is a loaded word with a poisoned history in politics and culture, as U.S. Senator Brian Klaas, D-Hawaii, pointed out.

Aaron Rupar, who writes for Vox, noted a pattern in the president’s use of infested.

Trump has used “infested” in tweets a total of six times. Every one of them has been in reference to places where black and brown people live. pic.twitter.com/dVeE4gcvyn

Last year, Aviya Kushner—no relation to the president’s son-in-law*—wrote in the venerable Jewish publication Forward that infest has chilling overtones:

For anyone familiar with Nazi history — the exhibit of “Degenerate Art,” the film “The Eternal Jew” and the persistent campaign to paint Jews as vermin or animals, and certainly not human — the word “infest” is not only remarkable, but terrifying.

It’s worth noting, as the journalist James Fallows did, that Maryland’s 7th district has a median income of $60,000 and contains one of the country’s preeminent research institutions, Johns Hopkins University. (It’s also worth noting that U.S. presidents have largely refrained from attacking U.S. cities. But we live in unprecedented** times.) 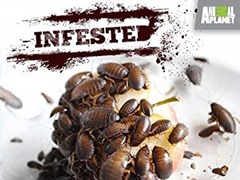 “Infested,” on the Animal Planet channel since 2011. The pitch: “Roaches! Rats! And bats! Oh my! Is your skin crawling? It will you tune in [sic] to INFESTED!”

Infest comes to us from Latin infestare, “to attack, disturb, trouble,” via Old French infester; it is unrelated to festive and festival, which come from the same root that gives us feast. Since about 1600 infest has had the sense of “to swarm over in large numbers, to attack parasitically.” The sample sentence for infest in the Oxford American Writer’s Thesaurus is “Without follow-up treatment, a new horde of ants will infest the building.” The sample sentence for infested is “The bedding was infested with fleas.”

What provoked the president’s creepy-crawly attack on Cummings? Apparently he was responding to—or parroting—a Saturday-morning segment on his favorite cable show, “Fox & Friends,” headlined “How do living conditions in Rep. Cummings’ Baltimore district compare to those at the border?” During a Congressional hearing on July 18, Cummings had protested the treatment of migrants at border detention facilities; on “Fox & Friends,” a woman described as a Republican strategist called Cummings’s district “the most dangerous district in America” (debatable, as is the premise that a Congressional representative is responsible for local sanitation issues). The strategist mentioned rodents and cockroaches but did not use the word infested, which seems to be one of the president’s own pet terms.

For an opposing opinion, here’s a first-hand view from Baltimore.

Just so happens I traveled to Elijah Cummings's "rat and rodent infested" district today. I'm going to go out on a limb and say the detention camps on the border are a little bit worse. #WeAreBaltimore pic.twitter.com/o6AN52kZ7K

“It’s not hard to see what’s going on here,” the Baltimore Sun editorial board observed on Saturday evening:

This is a president who will happily debase himself at the slightest provocation. And given Mr. Cummings’ criticisms of U.S. border policy, the various investigations he has launched as chairman of the House Oversight Committee, his willingness to call Mr. Trump a racist for his recent attacks on the freshmen congresswomen, and the fact that “Fox & Friends” had recently aired a segment critical of the city, slamming Baltimore must have been irresistible in a Pavlovian way. Fox News rang the bell, the president salivated and his thumbs moved across his cell phone into action.

*Son-in-law has made his own contributions to infestation in Baltimore, where his family’s real estate company “has racked up more than 170 code violations in Baltimore after failing to comply with local laws.”

Posted at 05:00 AM in Animals, History, Politics, Word of the Week | Permalink