« On the Visual Thesaurus: Deep Thoughts | Main | Word of the week: Fellow »

Voice.com recently changed hands for $30 million, making it the most expensive publicly announced domain sale in history. (Relax; you can still buy a domain for a lot less.) (Domain Name Wire)

There’s no there there.

Brandwatch accepted the Dreyer’s English challenge:  eliminate very, rather, really, quite, in fact, just, so, pretty, of course, and actually from all tweets for a week. Here’s what happened.

“Early Americans distilled vivid metaphors from everyday life,” writes Rosemarie Ostler on HistoryNet. “They blazed trails. They played possum. They found themselves sitting on the fence. They barked up the wrong tree. They improvised outlandish fabrications like scrumptious and blusteration.” And they gave names to the flora and fauna they encountered, from dogwood to mule deer. (Via Language Hat)

Alexa the digital lackey is pushing Alexa the baby name into unpopularity, writes Laura Wattenberg at Namerology. Interesting footnote: Alexa was a web-traffic-tracking company in the 1990s that was acquired by Amazon in 1999. “When the time came to name their virtual assistant, they had in hand a simple, stylish, bold girl’s name for which trademark competition had been minimized for decades. Why look further?”

“We no longer put the circumflex on rôle or hôtel. We often implement accents incompletely, rendering carménère (a type of red wine grape) as carmenère, Ångström (a very small unit of measurement) as Ångstrom, and résumé as resumé. And sometimes we add them where they didn't even exist in the source: latté, for instance, from Italian latte, which has no need of the accent because in Italian you always say the e; maté and animé likewise add an accent as acupuncture to rouse a final e that we might otherwise treat as silent, though the source languages had no such need.” (James Harbeck on accented English, for The Week.)

Why Trump uses mock Spanish words like loco and hombres.(Ben Zimmer for The Atlantic) 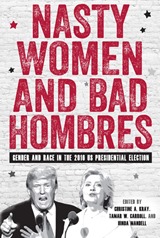 Nasty Women and Bad Hombres: Gender and Race in the 2016 Presidential Election

After 9/11, Clear Channel Communications, the largest owner of radio stations in the U.S. (since renamed IHeartMedia, circulated a list of “lyrically questionable” songs “that, in their titles or lyrics, vaguely refer to open subjects intertwined with the September 11 attacks like airplanes, crashes, violence and death, as well as the sky, falling and weapons. Louis Armstrong's ‘What a Wonderful World’ was infamously included because of Clear Channel’s belief that happy music was inappropriate for broadcast following the attacks. Also on the list, reproduced in its entirety in a Wikipedia entry: the Bangles’ “Walk Like an Egyptian,” the Beastie Boys’ “Sure Shot,” and Bob Dylan’s “Knockin’ on Heaven’s Door.” (Via FreeDarko)