One of the show’s greatest pleasures is watching O’Hara (whom you may recall from Best in Show and A Mighty Wind) play a has-been daytime-soap actress swanning around a provincial backwater in a limitless collection of wigs and black-and-white ensembles while purring (or barking) her nutty, self-absorbed aperçus in an indescribable faux-haute accent. And her vocabulary … well, it’s as though Roget’s Thesaurus walked into a bar and hooked up with a copy of Variety, circa 1931. 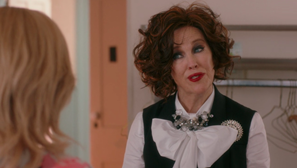 As Amanda Wicks wrote in The Atlantic:

As Schitt’s Creek has progressed, Moira’s vocabulary has evolved from erudite to eccentric. “Why must you be so constantly irksome?” she asks Alexis in the first season, after her daughter complains that Moira doesn’t know her middle name. But by the fifth season, Moira has traded “irksome” for more expensive baubles. While encouraging the sardonic motel owner Stevie Budd (Emily Hampshire) to play Sally Bowles in the town production of Cabaret, Moira tells her, “Underneath the brambly tartan blousant is a chrysalis bursting with potential.”

And for some obscure reason, Moira simply cannot say “baby.” It must—must—be bébé.

don't ask me why but here's 22 seconds of catherine o'hara saying bebe pic.twitter.com/PjCX0Vq9NJ

So: spanandry. (Or, to cite the script: “this rural spanandry.”) For starters, the accent’s on the first syllable. And if you know misandry (hatred of men) or polyandry (marriage to more than one man), you’ll recognize the back half of the word. But span-? It’s from a Greek word meaning “scarcity.” Thus spanandry: “lack or extreme scarcity of males in a population.” It’s not an old word: The OED’s earliest citation is from the title of an article in a 1924 issue of Nature: “Geographical spanandry in a Branchiopod Crustacean, Lepidarus apus.” The other citations are likewise zoological. (Science, April 28, 1967: “Polygamy is extreme, but, since this follows from the fact that males are produced in much smaller numbers than females, spanandry seems a better term, and is used here.”

Cole Porter wrote about spanandry by another name in his 1934 musical Anything Goes. “Where Are the Men?” was dropped after the original production, which is far better known for “You’re the Top,” “I Get a Kick Out of You,” and the title song.

(My thanks to John McWhorter, the linguist who hosts Slate’s “Lexicon Valley” podcast, for introducing me to this song in his April 30 episode.)

How Moira Rose would have picked up such an arcane and little-used word as spanandry is anyone’s guess. Best to just enjoy the titillation, as she herself would put it.

Posted at 06:00 AM in Canadian, Men, Strong Language, Television, Word of the Week | Permalink