« New work: Resourceful | Main | On the Visual Thesaurus: The language of e-scooters »

Word of the week: Sonder

This was going to be a short entry following up on a 2011 post I wrote about the Dictionary of Obscure Sorrows, an online lexicon of invented words created by John Koenig (the first syllable rhymes with pain). Koenig went on to achieve extra fame through his 2016 TED talk and a subsequent TED Radio Hour feature.

Then I started doing a little casual digging, and … hoo boy.

Here’s the tweet from Karen that sent me down the rabbit hole.

I am just an extra in the movie that is your life. https://t.co/l2QwqmoPUg

And here’s John Koenig’s definition of sonder, which he coined in 2012:

The awareness that everyone has a story – that all the random passersby you see around you have an emotional life just as rich as yours, even though to you they’re just an extra in the background

Sonder has a pedigree, although Koenig doesn’t credit it. In German, sonder is an adjective that means “special”; in French, it’s a verb meaning “to plumb.” In Afrikaans it means “without.” So you can see, sort of, how Koenig might have mixed all those meanings together to come up his own definition, which fills a gap in English.

Still, until I started idly searching online, I hadn’t realized how much sonder had resonated beyond TED and NPR, almost entirely in the last five years.

There’s a Sonder Solutions in Rancho Cordova, California, that’s in the business of “empowering disadvantaged individuals and underserved populations with whole person employment and workforce development services designed to promote self-sufficiency and independence.” The company doesn’t explain its name.

In Australia, Sonder “delivers a range of integrated community health services across metropolitan Adelaide, including mental health counselling and the Aboriginal Health program, Closing the Gap.” The company outgrew its original name, Northern Health Network, and explained the new name with a definition: “the realisation that each random passerby is living a life as vivid and complex as your own.”

In the U.S., Sonder Health wants you to “discover the value of telemedicine.” They don’t explain the name.

There’s Sonder Payments, a service of  the one and only Fifth Third Bank.

SONDER derives its name from the Dictionary of Obscure Sorrows, which defines the word as the realization that each passerby is living a life as vivid and complex as your own. That notion struck a chord, echoing the very ethos our furniture brand had inculcated when we first began offering design solutions in 2015. Now, led by the belief that interiors should reflect the individuals that reside within them, SONDER speaks fluently across multiple platforms of business. Comprised of three supporting arms—Sonder Living (consumer), Sonder Distribution (retail) and Sonder Projects (hospitality)—we aim to take a collaborative approach to the creative process and continue to prove that design firms are anything but linear.

In Inglewood, California, Sip & Sonder “is the premier destination for consumers, creatives, and curators to grab a drink, connect, produce creative products, and put sonder into action.” Yes, they include the Dictionary of Obscure Sorrows definition. And they have an elegant logo. 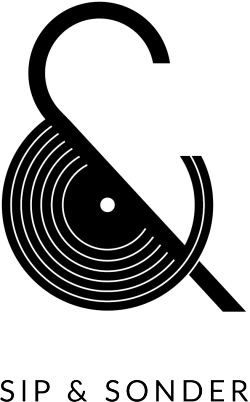 There’s a “themed dine-in initiative” (I think they serve food) called Sonder Cafe for students at the University of Nottingham, England. Also in Nottingham, yet apparently unrelated, is Sonder Design Studio; they “design and deliver captivating experiences for brands to communicate with their audience.”

Sonder Coffee & Tea sells “craft coffee and tea” made by “three friends in Denver, Colorado.” Yep, they use the definition on their home page. 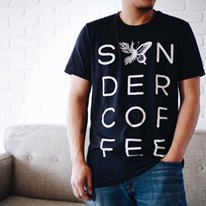 And here in the Bay Area, Sonder.com—tagline: “Taking Stay Further”—raised $135 million last year to grow “a hospitality business around nightly rentals that felt like apartments but had the consistency and quality of a hotel, down to the mini toiletries and fresh sheets,” according to an August 2018 story in Forbes. In contrast with Airbnb rentals, no one “lives” at a Sonder property; the company holds the leases, and the units are subtracted from a city’s available housing stock. 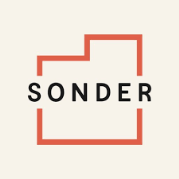 An interesting footnote: According to WhoIs records, Sonder.com was originally registered in 1999. It appears to have been transferred to the hospitality company in 2016.

There are 39 registered or pending SONDER trademarks in the USPTO database, but that number doesn’t represent all the Sonders out there. According to a Wikipedia entry,

Sonder has also been appropriated by various companies for use as the name of a bike brand and the title of a video game. The third album from indie pop artist Kaoru Ishibashi was named Sonderlust after this term from the dictionary and references the separation from his wife and his attempts to understand her life.

Multiple words from the [Dictionary of Obscure Sorrows], such as ellipism, énouement, and onism, were used as titles for various cocktails served at the Chicago restaurant Knife. Similarly, an art gallery exhibit for the works of Michael Sagato in Los Angeles uses words from the Dictionary of Obscure Sorrows to title each of his art pieces and to reference the meaning behind each piece.

In his TED talk, John Koenig talks about being surprised at hearing sonder “being used earnestly in conversations online, and then in person.” It had made the transition from private to public, from invented to “real.” But, he asks rhetorically, “What makes words real? A word is a key that gets us into certain people’s head.”

The “realest” word of all, he adds, is “OK”—a word that sprang into life as a joke in the 1830s and is now understood around the world. If sonder hasn’t yet achieved that level of success, it certainly isn’t for lack of sincere effort.

Posted at 06:00 AM in Hospitality, Naming, Restaurants, Trends, Word of the Week | Permalink

I'm confused about how "sonder" is used. Is it a verb—do you sit and sonder about things? An adjective—do you have a sonder moment? —or, a sondering moment? Or, does a (the) sonder hit you, like an inspiration, or religious awakening? Perspiring minds want to know.

I think the word 'sonder' can be used both as a verb and adjective. Interesting to read.