« May linkfest | Main | Some recent writing » 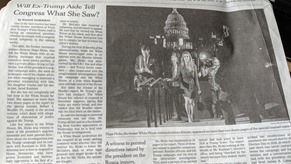 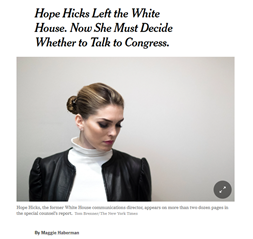 Online edition: Hicks in a brightly lit room, pondering the eternal verities while looking glamorous despite an ill-fitting turtleneck.

As many critics pointed out, on Twitter and elsewhere, the question Hicks must answer is not a philosophical conundrum but rather a matter of law. Hicks appears on more than two dozen pages of the Mueller Report, and the House Judiciary Committee has been subpoenaed to turn over documents by June 4 and to testify on June 19. Subpoena comes from Latin roots meaning “under a penalty”; the poena part is related to the English words penal, punishment, and pain. If Hicks existentially declines to comply, she faces a fine and jail time.

Perhaps because of her youth (she turned 30 last October), her beauty (she was a teenage model), her alliterative, evocative name (Hope springs eternal), or her tactiturnity (paradoxical in a communications professional), Hicks has been a dazzling enigma ever since she first joined the Trump White House shortly after the inauguration. The Times story, written by Maggie Haberman, uses the words “enduring mystique” and “dilemma” to describe Hicks and her predicament, as though she were choosing between vacation resorts rather than stiffening her spine to do her ethical and patriotic duty.

This is existential only in the sense that identifying yourself with Trumpworld has defined your life. She’s newly part of Murdochs’ world too. https://t.co/ppCSqYnq9b

As was Esquire editor-at-large Maximillian Potter.

Hicks may have faced "existential questions" when she decided to work for Trump and every time she decided to enable him, but this a matter of law. https://t.co/aVJ0AIF4Y8

Existential has meant “relating to existence” since it entered English in the mid-17th century. But it’s most closely related to the 19th-century philosophers Søren Kierkegaard (whose last name means “churchyard”) and Friedrich Nietzsche, and even more so to Jean-Paul Sartre (1905-1980), who wrote that “existence precedes essence” (and, of course, “Hell is other people”). Existentialism, the name for a philosophy that takes being as its starting point, is first recorded in English in 1933 as a translation of German Existentialismus. According to an entry in All About Philosophy, existentialism relies on the ideas that humans have free will, “human nature is chosen through life choices,” “personal responsibility and discipline is crucial,” “worldly desire is futile,” and “a person is best when struggling against their individual nature, fighting for life.”

Maybe there is, after all, something of the “existential” in Hope Hicks’s predicament (in addition to the particular “Hell is other people” of her erstwhile colleagues). Elizabeth Bruenig, an opinion columnist for the Washington Post, put it this way:

For a serious analysis of the Times story and Hicks’s role in White House cover-ups, see this Twitter thread by @emptywheel (Marcy Wheeler, an independent journalist who covers national security).

Posted at 06:00 AM in Current Affairs, Law, Word of the Week | Permalink

The only time I’ve ever been fired, in a 40 year career, the reason given was that “ it is an existential issue”. So, I consider most applications of the word to be a weasel term. In those cases, it often means, “I want you to play ball no matter what, so stop asking me about legal or ethical precedent.”