« On the Visual Thesaurus: The language of e-scooters | Main | May linkfest »

Word of the week: Doryphore

Few of us are likely to duplicate the feat of Ammon Shea, who read all 21,730 pages of the Oxford English Dictionary and in 2008 published a book about his accomplishment. (I wrote about Reading the OED here and here.) But anyone with a spare 45 minutes can easily and pleasurably gambol through the 400 or so words in The Dictionary of Difficult Words, a pulchritudinous and edifying new book by Dictionary.com lexicographer Jane Solomon, with cheerful illustrations by Louise Lockhart. 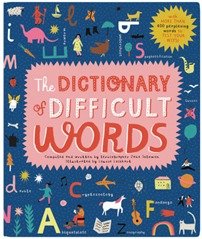 The book’s primary audience is children between the ages of 7 and 12, but as Jane* writes in an author’s note, “it’s written to appeal to adults as well. … This book welcomes all readers, even those who would never sit down and read a traditional dictionary cover to cover.”

And even adults who are possessed of a reasonably expansive vocabulary and pretty good Scrabble skills will discover new words in The Dictionary of Difficult Words. I certainly did.

A doryphore would point out my bad cropping of the right margin.

One of the charms of The Dictionary of Difficult Words is that it provides just enough information about a word to satisfy an inquisitive 9-year-old. The pronunciation guide is down-to-earth; the definitions violate a cardinal rule of lexicography—don’t repeat the word in the definition—because that’s the best way for a beginning reader to understand them.

If the definition of doryphore piques your interest, as it did mine—the word was new to me—you can turn to a more traditional reference, like the OED. There you’ll find a more traditional definition: “A person who draws attention to the minor errors made by others, esp. in a pestering manner; a pedantic gadfly.” You’ll also discover that the English word was borrowed from French, where it’s the scientific name of the Colorado beetle. (The Greek source means “sword-carrier.”)

And if you pursue your curiosity further, you may end up at Michael Quinnion’s authoritative World Wide Words, where you’ll read about how one pest became another kind of pest:

We owe this word to Sir Harold Nicolson, who introduced it to the world in the Spectator magazine in August 1952. In an issue of the same magazine later the same year, he described a doryphore as a “questing prig, who derives intense satisfaction from pointing out the errors of others.”

The history of French doryphore is a bit older: the word was a French slang term for the occupying German soldiers during World War II. “Later,” writes Quinnion, “it became a derogatory term for tourists, much as the locals in Cornwall call them emmets (ants).”

The Dictionary of Difficult Words is full of little treasures like doryphore. Some of the words will appeal to kids’ love of the weird and monstrous: kraken, yeti, ogre, grimoire, ufology. Some are fun to say: lollygag, lollapalooza, yomp, jobbernowl. Quite a few are about words and language: umlaut, jargon, portmanteau, and, of course, lexicographer. I was happy to see some of my own favorite words here, including petrichor, kakistocracy, apricity, and mumpsimus. 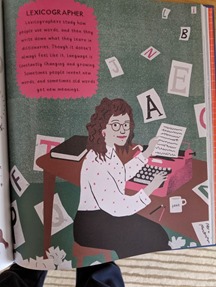 A rather good likeness of the author.

Why write a children’s dictionary with only “difficult” words? In an afterword, Jane Solomon answers that question:

The first dictionaries in English were dictionaries of difficult words, just like this book. They were often collections of vocabulary from very specific topics like gardening, law, medicine, and words borrowed from other languages. It’s only in the last few hundred years that dictionaries have been thought of as general-purpose reference books. 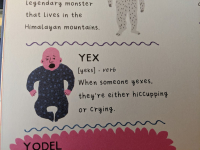 How did I live this long without knowing the word yex?

Buy The Dictionary of Difficult Words for a child, or for several children, or for yourself; or donate a copy to your local library. You’ll be learning new words and also celebrating a venerable lexicographical tradition.

* I can call her Jane because I’ve met her more than once. (In fact, she lives in my neighborhood.) However, I bought a copy of the dictionary out of my own dictionary-buying budget.

Posted at 06:00 AM in Books, Dictionaries, Word of the Week, Words | Permalink