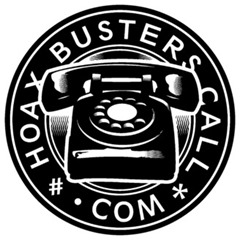 HoaxBustersCall.com was a podcast; it has been dormant since May 2018. It appears to have been in the business of disseminating rather than disproving hoaxes. (From the show’s description: “The concept of Government is a Mass Delusion, The CONstitution, Perception Management, Weaponized Culture, The Tell-a-lie-vision, The Moon Walk and other NASA Hoaxes.”) Not to be confused with HoaxBusters.org, which “retired” in 2017 after 17 years of actually debunking Internet hoaxes.

Over the last week, hoax has appeared in a number of dispiriting headlines and tweets related to, among other things, the drastically truncated summary of the Special Counsel Robert Mueller’s report; l’affaire Jussie Smollet; and the Sandy Hook massacre.

Here, for example, is Tom Fitton, a self-styled conservative watchdog who has been a guest on Fox News and whom the current occupant of the White House likes to quote.

Let’s be clear, neither Mueller, Obama FBI, DOJ, CIA, Deep State, etc ever had good faith basis to pursue @realDonaldTrump on Russia. Russia collusion was a hoax & a criminal abuse, which is why @JudicialWatch will continue to fight for truth in fed court. https://t.co/fPy1HQAeaE https://t.co/3EmcWmn34f

And here’s Fox News itself on March 25. Gregg Jarrett is the author of a book titled The Russia Hoax.

On the other side of the political spectrum, here’s Mother Jones magazine.

MoJo Washington bureau chief David Corn writes: “This is the original sin of the Trump presidency: he and his crew aided and abetted the Russian attack by lying about it and running interference for the Russians.”

There’s no escaping hoax in news of the entertainment industry (which, when you think about, is every industry in America). Jussie Smollett, an actor on the Fox series Empire, had been charged with fabricating a hate crime in Chicago to amp up his celebrity quotient; the charges were dropped last week. Chicago’s mayor, Rahm Emanuel, had a few words to say about the whole mess: “The only reason Jussie Smollett thought he could take advantage of a hoax about a hate crime is for the environment, the toxic environment that Donald Trump created.”

And Sandy Hook? Radical ranter Alex Jones, host of InfoWars, is being sued by 10 families of the 2012 school shooting over his repeated claims, over many years, that the massacre was a staged “hoax.” Jones is attempting a temporary-insanity defense, claiming that he “almost had like a form of psychosis back in the past where I basically thought everything was staged, even though I’m now learning a lot of times things aren’t staged.” Always the eloquent one, Alex is.

I did find one amusing use of hoax: in the name of a San Francisco company that, according to its trademark filing, hosts “social entertainment events, namely, interactive art exhibits, party gaming events, alternate reality games, and custom interactive entertainment services, for others.” Hoax’s website (http://hoax.studio) goes further, listing “ritual performances,” “procedural interactions,” and “rituals & forgeries.”

Hoax’s tagline, “Subversion as a Service,” spoofs the tech industry’s SaaS, or “software as a service”

“Unreality Check,” my November 2016 column for the Visual Thesaurus about words related to fraud, grift, and the post-truth world.

Posted at 06:00 AM in Current Affairs, Holidays, Irony, Media, Word of the Week | Permalink

I'm used to seeing the word with a modifier, as in "cruel hoax."