Here’s how Times reporter Katherine Rosman describes the doll at the center of it all:

Barbie has been a go-to emblem of all that has ill-served girls and young women in American culture. Living in a world that is almost exclusively white, the doll has breasts that are disproportionately large compared with her hips, and her feet are contorted into a permanent “floint” (short for flexing your toes back as you point the rest of your foot).

The story doesn’t explain who coined floint, or when it was first used. I didn’t have much luck in that department either, although I discovered some clues.

For one thing, it isn’t “short for” anything; it’s a portmanteau word. And it’s popular in yoga circles, which may be where it originated. This was news to me, because in all my years of trying (and repeatedly failing) to appreciate yoga, I never heard an instructor use the term. Maybe I quit too soon. (Nah.) A March 2009 post on the now-defunct Fresh Living “health and wellness” blog gave floint “yoga word of the day” honors, and defined it as “basically standing on your toes while your feet are in the air.” It’s also called, no surprise, “Barbie feet.”

In May 2009, Fresh Living followed up with a more thorough consideration of floint:

A flexed foot is an action of muscle energy because it encourages the energy to hug into the body (instead of away)–go ahead, flex your foot and you’ll notice that your toes lift toward your face. Now a pointed foot has the opposite affect [sic]: it sends the energy away from the body. Point your toes and you’ll see it lengthens the way your leg looks and points your toes away from your face sending the energy out.

So the floint, as Valerie points out, is the perfect balance between these two opposing energy flows. It’s a point, with the toes curled back (with the balls of your feet pressing away like on a gas petal [sic]); just like Barbie.

Yoga is so freaking serious, and floint is so Jerry Lewis–level silly, that I can’t imagine getting through a yoga class without literally ROFLMAO if an instructor commanded us, in that drony yoga-instructor voice they have, to floint our feet. Then again, I don’t expect to be returning to yoga in this lifetime, or the next.

Fun(-ish) miscellaneous fact: While researching this post I learned that “Barbie feet”—posing barefoot as though you’re in high heels—was a trend on Instagram last summer. 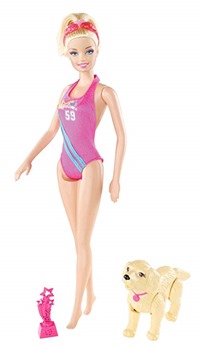 “Team Barbie swimmer doll” showing off her floint. The dog is included, as well it should be for the nearly $100 price tag.

I myself, by the way, have off-the-charts flointy feet, which were an asset in ballet class but tend to make it painful to walk like a in regular shoes like a normal person. I tried taking a photo of me en flointe, as it were, but decided to spare you the grotesquerie.

Posted at 06:00 AM in Books, Fashion, Portmanteaus, Word of the Week | Permalink