Marijuana is a plant, of course, and plants don’t require kosher certification under Jewish law. Cannabis edibles, on the other hand, contain additional ingredients, and would need to be approved by a supervising rabbi. (Gelatin, for example, can be problematic.) But Passover has its own sticky thicket of dietary restrictions. Even if you’re not Jewish, you probably know that leavened bread is forbidden (which is why Jews eat matzah and products made from matzah meal for eight days), but there are also prohibitions on peas, corn, beans, and other legumes. (But only if you’re an Ashkenazi Jew. Don’t ask; I didn’t write the rules.)

Cannabis isn’t a legume; so far, so good. Still, if you want to be super-cautious about your Pesach high, you’ll be glad to know that in 2016 Israel’s chief (Ashkenazi) rabbi ruled that marijuana, whether smoked or eaten, is indeed kosher for Passover consumption. This ruling led to my all-time favorite Passover headline, from the Times of Israel.

This blessing came four years after a different rabbi blessed a California cannabis strain now known as Kosher Kush. According to Wikileaf—yes, dear reader, there is a Wikileaf—the strain had previously, for reasons unknown, been called Jew Gold, or JG: “As the strain became more mainstream and a favorite among dispensary owners, its original offensive name was changed to something more ... say, kosher.”

The most comprehensive, not to mention creative, Weed-Over guide—in fact, the only guide I’ve managed to find—was written by the aforementioned Arielle Kaplan.  Kaplan enumerates eight ways to incorporate weed into your seder, including substituting four joints for the traditional four cups of wine and making “K-for-P pot brownies.” She also links to a video tutorial for adding marijuana (technically, CBD-infused schmaltz, or chicken fat) to matzah balls; it’s taught by the grande dame of Jewish cooking, Joan Nathan, so it’s certified kosher for foodies.

Finally, here’s something for you ladies with chutzpah to wear to your 4/20 second-night seder. It’s weed-free but guaranteed to elicit the fifth question: “What is she smoking?” 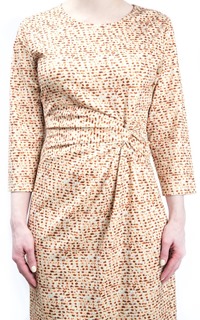 Posted at 06:00 AM in Cannabis, Hebrew, Holidays, Marijuana, Naming | Permalink