The news about Burger King introducing the meatless Impossible Whopper, made with patties from Oakland-based Impossible Foods, was announced on April 1, but it’s not a joke.

“Burger” is short for “hamburger,” which is a truncation of “Hamburger steak,” the name that began appearing on American menus in the late 1800s, a period of heavy German immigration. “Hamburger” simply means “from the city of Hamburg,” in Germany; perhaps because the original hamburgers were made from beef, not ham, the burger suffix (which means “townsperson”) became an acceptable substitute for the full word. (During World War I, when anti-German sentiment ran high in English-speaking countries, “Salisbury steak” began replacing “hamburger steak” on menus and in recipes. It was named not for the medieval cathedral city but for an American food faddist, Dr. James Salisbury, who served as a physician during the American Civil War and who believed that soldiers’ diarrhea could be cured with a diet of coffee and lean chopped beefsteak.)

A 1946 issue of American Speech noted the rise of “Burger” (capitalized) to mean “hamburger sandwich.” A February 28, 1960, article in the Observer (UK) noted that “Recently the Hamburger has become just a ‘burger’, and there are ‘beefburgers’, ‘chefburgers’, ‘cheeseburgers’, ‘eggburgers’ and even ‘kingburgers’.” (From the OED, which does not explain what a “kingburger” is. I assume it was not from Burger King.)

Merriam-Webster’s second definition of burger is “a similar sandwich [to a beef burger] with a nonbeef filling,” and gives “crab burger” (something I for one have never seen) and “tofu burger” as examples of combination forms. Let’s not forget nothingburger (a trivial or insignificant matter), said to have been coined by the gossip columnist Louella Parsons in 1953; and mouseburger (“an unexceptional woman who relies on her own determination for success”), attributed to Cosmopolitan editor Helen Gurley Brown; and ranchburger (a cookie-cutter ranch-style house in the suburbs—a suburburger?).

Burger is so widely accepted to mean “sandwich filling made of some sort of chopped-up foodstuff” that even the most earnest meat-substitute purveyors use it as a default. (They could use “patty,” which originally meant “a small pie,” and which is closely related to French pâté and Italian pasta: in other words, a paste. It would certainly be preferable to disc.) Not so for other vegetarian equivalents, as I observed in a 2011 column for the Visual Thesaurus, “Phood for Thought.” I wrote about chik’n, turk’y, bac’n, cheez, and the sui generis Wyngz, but I did not anticipate Gardein’s stea’k and e’ggs.

Apostrophes are one convention for communicating “not meat but meat-ish.” (Gardein also sells “saus’age.”) The -less suffix—porkless, beefless, fishless, crabless—is another, but I’m, um, less than impressed with a brand that tells me what it isn’t instead of what it is. The Guardian article lists some unappetizing alternatives for familiar meat names—tube, slab, slice—that are too suggestive of building materials to hold much promise.

The EU has taken a split position on one category of vegetarian substitutes: non-dairy “milk” products. Since 2017, tofu “butter” and veggie “cheese” have been verboten, but cocoa butter and coconut milk are kosher, in more ways than one. The U.S may follow suit. In 2018, an FDA commissioner hinted that the agency may “crack down”—there’s that term again—on the appellations of beverages that don’t come from lactating animals. Examining the controversy from a linguistic angle, Wall Street Journal columnist Ben Zimmer wrote:

Dictionary definitions of “milk” are indeed more expansive than the FDA’s “standard of identity” delineating it in a legalistic fashion. As early as the 14th century, according to the Oxford English Dictionary, “almond milk,” the creamy extract of blanched almonds, was known as “almande mylke” or “mylke of almaundes,” modeled on the French expression, “lait d’amandes.”

Nowadays, you can find almonds—or at least their first syllable—blended into the name of a branded beverage, MALK. It’s a catchy way to sidestep the classification conundrum, and it approximates the way a lot of Americans pronounce milk. Remember “milk from contented cows”? Today they’d be MALKontented. 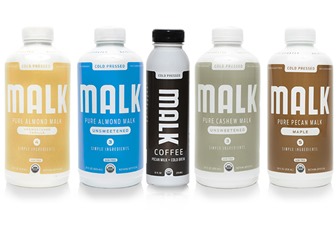 Posted at 06:00 AM in Current Affairs, Food and Drink, Law, Naming | Permalink

Malk! Rhymes with chalk! So that’s gonna be a great slogan, right?

A Royale by any other name...

I will prefer to go with veggie gaskets.