Word of the week: Leech

I’m reading Rose George’s new book, Nine Pints: A Journey through the Money, Medicine, and Mysteries of Blood, which is written in an appealingly  conversational style and which pumps out a steady flow of startling and irresistible stories about transfusion, menstruation, hemophilia, and blood-borne disease. I’m an every-eight-weeks blood donor myself (O-positive, CMV-negative), so I was riveted by George’s accounts of whole-blood and plasma donation. For sheer eye-widening, jaw-dropping amazingness, though, it’s hard to top Chapter 2: “That Most Singular and Valuable Reptile,” which is all about leeches. 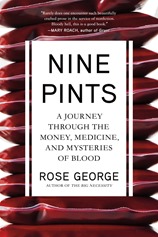 Leeches are not, of course, reptiles; the chapter title comes from a treatise published by one George Horn in 1798, during the full flowering of medical leech mania, when it was believed that relieving the body of excess blood was the cure for just about every ailment from headaches to syphilis to cholera. Leeches are bloodsucking aquatic annelid worms of the order Hirudinea (hirudo is Latin for “leech”); the ones used for medical purposes have, George tells us, “ten stomachs, thirty-two brains, nine pairs of testicles, and several hundred teeth that leave a distinctive bite mark” that resembles “either a wound made by a circular saw or a Mercedes-Benz logo.” They’re still being bred for specialized medical purposes, especially skin grafts; George describes her visit to Biopharm, in Wales, whose bland name masks its function as a medical leech farm.

Leech, designating the animal, has been an English word since about 900. That’s also when leech had a second meaning: “physician.” Leeches used leeches, but the two words evolved separately. George writes:

Doctors were called leeches, but because of an etymological coincidence, not for their fondness for prescribing worms. (Leeches were named for the Old English word laece, meaning “worm,” and derived from Middle Dutch; doctors were also called laece, but derived from the Old Frisian laki, meaning “a physician.”) This name for physicians lasted until the Renaissance and bequeathed to us such wonderful book titles as Leeching, Wortcunning, and Starcraft of Early England.

The Online Etymology Dictionary goes into more detail about leech=physician:

“Leech” has been used figuratively to mean “human parasite” since the late 1700s.

Here are some more leech facts from George’s book:

Leech application in a hirudotherapy clinic in Talinn, Estonia.

Read my post about Rose George’s 2008 book The Big Necessity, which is all about human waste. I also recommend her 2013 book Ninety Percent of Everything, about shipping and globalization.

Posted at 06:00 AM in Books, Medicine, Word of the Week | Permalink

The British sociologist Richard Titmuss wrote a fascinating book, The Gift Relationship, about various systems of medical blood collection. He categorized these as coerced (Soviet Army soldiers were required to donate blood at regular intervals), commercial (both whole blood and plasma could be sold, typically in poor urban neighborhoods), and voluntary. The evidence showed pretty clearly that the lowest rate of rejection for presence of infection or other factors making blood unusable occurred where the collection relied on volunteers. (I was an every-eight-week donor until I underwent chemotherapy for cancer, at which point the blood bank on Masonic Ave. told me I wasn't eligible any more.)