On the Visual Thesaurus: “Influence” and “influencer”

Here’s something you probably didn’t know about me: I’m an influencer. At least Nordstrom thinks I am; I’ve racked up enough Nordy Club points to attain that semi-exalted status. But what does it mean?

My latest column for the Visual Thesaurus looks at ancient and contemporary meanings of influence and influencer, words that got a recent boost from a mysterious egg on Instagram and from Pope Francis’s Twitter account. Full access to the column is restricted to subscribers; here’s an excerpt:

The original “influencer” book was Dale Carnegie’s How to Win Friends and Influence People, published in 1936 and never since out of print. The “influence” in Carnegie's title is an old word, derived from the Latin for "flowing in," that was originally used in English in the 14th century to refer to the streaming of a fluid from the planets or stars that affected human behavior. (Astrology, in other words.) The viral disease known since the 1700s as “influenza” – Italian for “influence” – was originally attributed to occult or atmospheric influences; it started being abbreviated as “flue” around 1839, and as “flu” about six decades later. “Under the influence” (of alcohol) appeared in the 1860s; Mark Twain was one of the first to use the phrase. “Influence peddler” – a not-entirely-laudatory term for a person with the connections to arrange lucrative government contracts (for a fee) – entered the lexicon around 1949. 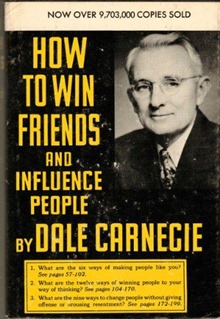 Today’s influencers are also selling connections, but those connections are measured in Instagram follower counts and YouTube “likes” instead of Senate votes. The professional influencer may be a teenager paid to promote juice or scented candles; it may even be an animal. (Yes, there are dogfluencers. And also fitfluencers, twinfluencers, and – my favorite spinoff – outfluencers, influential outdoors enthusiasts. For several years there was a parody Twitter account, @ProfJeffJarvis, that mocked the real Jeff Jarvis, a media and tech writer, as a “thinkfluencer.") The promotion – also known as “sponcon,” for “sponsored content” – isn't top down, like a TV commercial or billboard, but embedded in your social-media feed, “shared by someone who seems, on some aspirational level, like a peer,” as Annalisa Quinn wrote last year in the New York Times Magazine.

Read the rest of “Under the Influence.”

Posted at 06:00 AM in Visual Thesaurus, Words | Permalink